Researchers at UK-based Verisk Maplecroft found 84 of the world’s 100 fastest-growing cities are at “extreme risk” from the impacts of a warming planet, including 79 in Africa.

That group contains 15 of the continent’s capital cities and many of its commercial hubs, including Kinshasa in the Democratic Republic of Congo, Nigeria’s most populous city Lagos, Tanzanian business hub Dar es Salaam and Angola’s capital, Luanda.

The Verisk Maplecroft analysis combined its own annual index of vulnerability to climate change with U.N. projections on urban population growth to 2035.

Kinshasa, for instance, is now home to about 13 million people, but that figure is set to double by 2035.

The city is exposed to shocks from extreme weather, including flooding, as well as slower climate pressures such as drought in surrounding areas, which could drive poor farmers into the city while disrupting food and water supplies, the analysis noted.

It and other African cities at extreme risk are grappling with high poverty levels, expanding slums, weak governance and limited ability to adapt to climate shifts, researchers said.

Niall Smith, an environmental analyst with Verisk Maplecroft, warned wilder weather and rising sea levels could “underpin a whole host of secondary impacts and social issues” such as poverty, violence and resource insecurity.

“That is something we would foresee as getting much worse in these high and extreme risk locations,” he added. 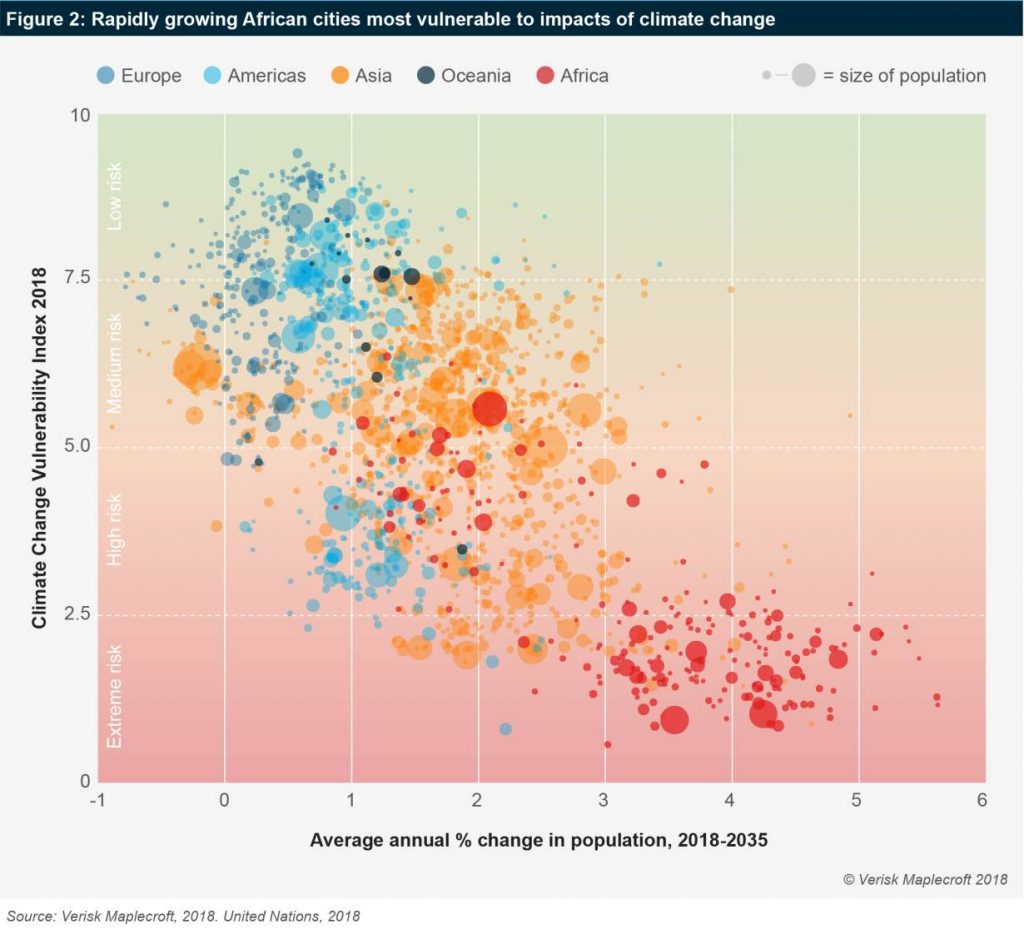 Commenting on the findings, Mami Mizutori, head of the U.N. Office for Disaster Risk Reduction, said rapid, unplanned urbanisation – “where slums are being created overnight” – is increasing disaster risk in many developing-world cities.

At the same time, more effort is needed to help rural communities cope with the harsher climatic conditions that are pushing people into cities to seek work, she noted.

“Unless we tackle the development issue as a whole, the urbanisation that is becoming a risk driver is not going to stop,” she added.

“The biggest problem we have is financial constraints,” she told the Thomson Reuters Foundation on the sidelines of a conference on smart cities in Barcelona.

Luanda struggles with high heat levels, as well as water shortages, she said.

Using International Monetary Fund projections, it estimated the amount of GDP at risk in cities over the next five years.

On that measure, Jakarta led the 10 cities rated as “extreme risk”, with $233 billion exposed to climate change in 2023, following by Manila with $166 billion at risk.

Companies working in and near these cities will have to contend with direct climate change impacts, ranging from destruction of infrastructure and housing by disasters to worker fatigue or death linked to high temperatures, the analysis said.

Researchers said businesses operating in developing-world megacities should do more to build resilience to climate shocks to protect assets and staff, while satisfying investors they are factoring climate risk into their planning.

Governments must also consider how their decisions will play out in the future, even if their top priority is to aid residents hit by disasters or conflicts, said Richard Hewston, principal environment and climate change analyst with Verisk Maplecroft.

“In an ideal world, you would be putting things in place that provide immediate relief but are sustainable for the next 20 to 30 years, and incorporate an element of climate change adaptation,” he said.

But where the foresight or means to do that are lacking, “it’s a vicious cycle”, he noted.

Spain and France – 2 Dead, 150 Evacuated After Flash Floods and Landslides

Climate Change – the Human and Economic Outlook for Europeans