Flooding has continued in Somalia during May, 2013, with reports of 7 children dying and as many as 50,000 people displaced.

The floods are a result of the Gu rains – the long monsoon that takes place between March and June (the short monsoon occurs between October and December). The Gu rains are often long awaited and thankfully received since they end the often long period of drought for the the communities in the region, especially the farmers and those dependent on agriculture.

However, the Gu rains also often bring devastation. This time intense rainfall has led to flooding of 6,4000 hectares of farmland, leaving 50,000 without homes or shelter, having to move away from the flood zones.

Communities in the southern and central parts of the country have been affected, with the areas around the Juba and Shabelle rivers are those most at risk. Baidoa and Jowhar areas have reported flash floods.

Worse still, the flood waters now present the danger of water-borne disease to the thousands still in close proximity to the flood zones where the stagnant water lies. The UN warned of major health risks, including increased incidents of cholera, diarrhoea and malaria.

On the UN list of areas of most concern were Baidoa, Jowhar, Miido, and also Wanlaweyn in Lower Shabelle, Hudun district in Sool and Dharoor in Sanaag as well as Abudwaq in the Galgadud region of central Somalia.

Somalia has suffered from severe floods on a regular basis, with the most severe in 2006, 2011 and 2012. For this reason the humanitarian agencies are keeping a close eye on events in Somalia today. , with a view to a longer term strategy of flood prevention and preparedness.

In his recent visit to Somalia, the UN Humanitarian Coordinator for Somalia Philippe Lazzarini said:

“As floods continue to wreak havoc in most parts of the country, the UN and its humanitarian partners hope to come up with a long term strategy that would increase the preparedness of the people so that Somalis can cope with shocks such as drought, flood and food insecurity in the future”.

“Communities in Somalia will continue to be exposed to flooding and drought conditions…Our goal is to help people and communities to become better prepared to cope with shocks and then quickly recover from the impact. Building such resilience is at the heart of our strategy to make a difference in people’s lives and move away from the cycle of recurring crises.”

Somalia is of course no stranger to displacement. It has seen more than two decades of conflict, as well as experiencing floods, droughts and famine that have displaced hundreds of thousands of people across Somalia. Floods also affected roughly the same parts of Somalia in April this year resulting in loss of property and damage to infrastructure. See the map of flood zones in Somalia from OCHA below: 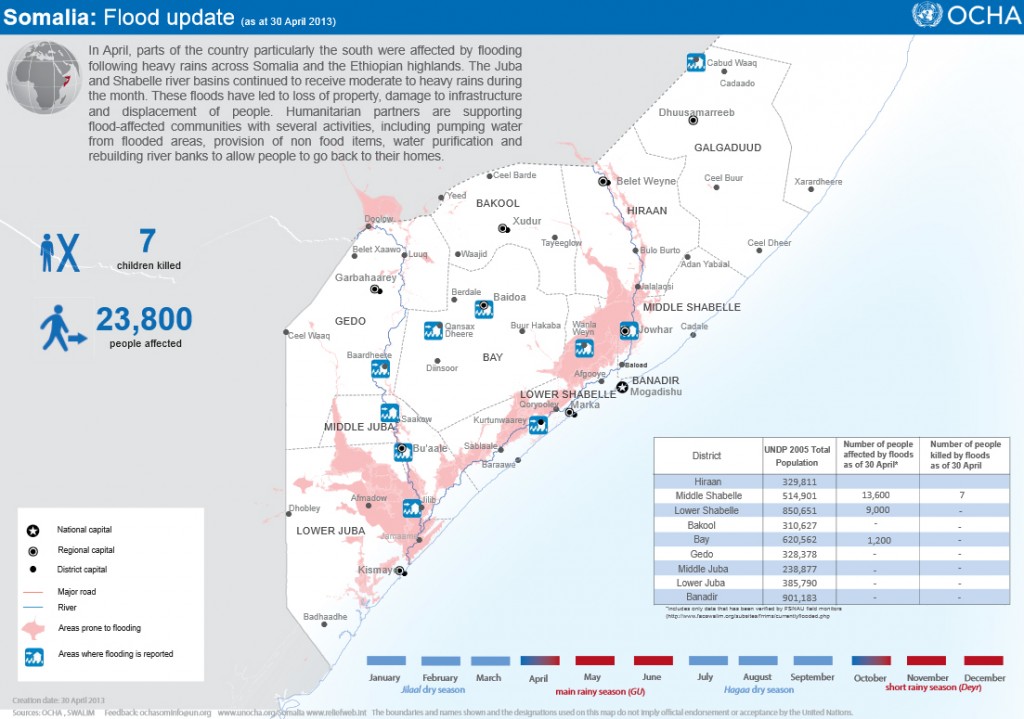