What is it like to have 3 years of almost constant heavy rainfall?

Colombia has endured extreme flooding over the last few years. The rainy season in Colombia lasts from march to mid June, although in some areas there is another, later rainy season from around November. It is heavy rainfall that is responsible for much of the flooding that has taken place in Colombia in the last few years. Some of the affects of the flooding has been worsened by landslides in the moutains and countryside, and in the cities, over development and building on flood plains.

Heavy rainfall in the past few days has affected the western parts of Colombia, causing floods. Colombian Government reports 4,750 people affected in Choco and another 405 affected in Antioquia on 26 and 27 May. OCHA/REDLAC reports a total of 650 people affected by floods in Valle del Cauca and Putumayo, as well as damaged roads and bridges in Santander, isolating ca. 1,000 families.

And just a few days ago, the Colombian city of Cali (the third largest in Colombia) was badly hit by floods after some particularly heavy rainfall. Streets and homes were flooded as the city’s drainage system collapsed under the strain of excess water. Areas in the north and east of the city were particularly badly affected. The heavy rainfall also resulted in landslides, one of which blocked a major highway. 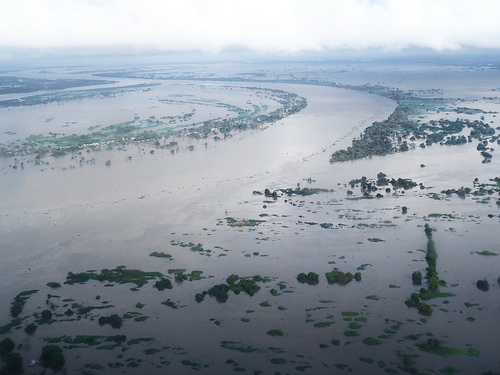 The city – the full name of which is Santiago de Cali – had suffered from heavy rainfall just days earlier, as this report (in Spanish) from El Pais shows:

Earlier, in mid March this year, the flooding was more widespread and affected 7 of Colombia’s 32 departments. As many as 45,000 people had to leave their homes as a result. The weather forecasters suggested that the heavy rains would be continuing until May and it seem they were right.

The areas affected this year include: Antioquia (northwest), Valle de Cauca (southwest), Cundinamarca (central), Tloima, and Caldas (both mid-west). Worst hit of all departments was Chocó, where a state of emergency was called and the central government stepped in to provide humanitarian aid.

During the March 2013 floods, the head of Colombia’s Institute of Meteorology and Environmental Studies said:

“The amount of precipitation has increased but the huge amount of rainfall has been unprecedented. The Andean region of South America has recorded huge amounts of rain.”

But huge rainfall isn’t an unusual story in recent times in Colombia. Indeed it seems that the weather has been imitating the five year long downpour from Gabriel García Márquez’s novel, One Hundred Years of Solitude.

In 2011, for example, it rained for almost 11 months non-stop. According to the BBC,

The rain has flooded towns and huge swathes of farmland. This year’s rainy season is the worst in Colombia’s history.

The worst of the floods of 2011 began in late April and went on throughout the year. They were responsible for the deaths of around 200 people and affected nearly 300,000. But in fact it is hard to find a distinctive gap between the flooding in 2011 and the previous year. It is too simplistic to divide the floods in terms of years. The disaster caused during 2011 was, in many respects, simply a continuation of what was happening in 2010. The floods need to be looked at as one, longer disaster, running from early 2010 to late 2011. If you look at some statistics from this time period, the scale of the floods becomes even more apparent..

As Time Magazine put it:

All told, more than 3 million people — nearly 7% of Colombia’s population – have been displaced or have suffered major water damage to their homes and livelihoods. President Juan Manuel Santos calls it the worst natural disaster in the country’s history, one his government predicts will shave 2.5% from Colombia’s 2011 GDP.

Source: Time, Who Will Stop the Rain?

But rather like the flooding in the Mekong Delta area of Vietnam (which we discussed earlier), the flood disasters in Colombia unfolded slowly. Day after day of heavy rainfall eventually took its toll, but the issue never really hit the headlines in the way a flash flood, hurricane of tornado would.

Yet between 2010 and late 2011, parts of Colombia received something like 6 times the average amount of rainfall. Seasons were blurred – in some of the regions where there were normally 2 distinct rainy seasons experienced just one, long period of rainfall.

The flood situation was worsened by frequent landslides. Particularly susceptible are the mountainous Andes regions in Colombia, where saturated earth and a raised water table resulted in regular mudslides throughout.

The recent floods in Colombia have also raised familiar issues; over-development in flood plains, and poor re-engineering of the country’s rivers. As Time reported:

As for the country’s waterways, reengineering has made some even more prone to flooding. “These are natural catastrophes but, essentially, they are man-made,” Bruno Moro, the U.N. Humanitarian Coordinator in Colombia, told TIME. A vivid example is the Bogotá River, which runs through the capital and has become an all-purpose dumpster for garbage, sewage and industrial runoff. The waste plus the rerouting of streams into the river have swelled water levels, and massive earthen embankments are now required to keep the river on course.