Update: On 20th June, a tropical storm warning was in effect for Punta el Lagarto to Tuxpan. It is feared that the tropical storm will prodcue heavy rainfall of up to 25 cm (although it is more likely to be between 7.5cm and 12.5cm) across southern Mexico.

40,000 people have been evacuated from their homes in Mexico as a result of flooding. The state of
Coahuila is said to be worst affected, in particular the city of Piedras Negras, which lies close to the border with Texas, USA.

According to an official statement from the Coahuila state government, the floods have damaged as many as 1,000 homes, with one person dead. Businesses have also been badly hit, especially as the flooding was severe in the centre of the city of Piedras Negras.

The floods are a result of torrential rainfall that took place over the weekend of 15th June.
Government secretary for the State of Coahuila, Armando Luna Canales said:

the storm…began Friday afternoon and continued into Saturday (and) dropped 60 percent of the rain usually seen in a full year in Piedras Negras.

Piedras Negras lies on the Rio Grande river, just across from the Texas city of Eagle Pass. Officials there said that 17 inches of rain had fallen over the weekend. Some residents were evacuated as a precaution. 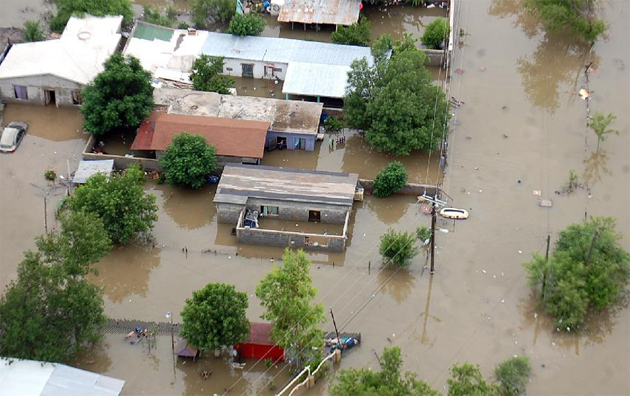 The massive amount of rain quickly raised the water level of the Rio Grande River Valley from around 3 feet at the Eagle Pass Water Level Gauge, to a raging torrent over 17 feet high, all in less than 24 hours time.

On Monday 17th June Piedras Negras, Coahuila, was declared a disaster zone by state governor, Ruben Moreiraon. This means that the area will have access to the National Disaster Fund to ease the situtation and help with repairs. Later, a further five municipalities in northern Coahuila were added to the list of disaster zones: Nava, Zaragoza, Morelos and Sabinas.

Coahuila is Mexico’s third-largest state and has a population of just under 3 million people. It is the country’s most important region for coal.