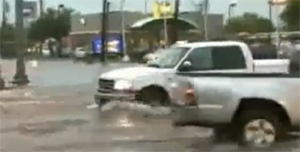 It seems the flooding in the USA has moved further south over the weekend. Houston, Texas, was the latest area to be hit, after suffering torrential downpours and storms on Saturday 27 and Sunday April 28. Parts of Texas saw up to 8 inches of rain, with Harris County being one of the hardest hit. Fortunately no deaths have been reported as a result of these flash floods. However, the flooding has played havoc with traffic, seeing many cars and drivers stranded on roads. Some drivers caught out in the flood waters found their vehicles stalled out in the high, fast-moving water.

According to ABC Local:

Dozens of people across the Houston area spent part of Saturday and into Sunday morning camped out inside their cars surrounded by flood waters.

Several cars were submerged under more than a foot of water in parts of town and some drivers say they had to jump out of their cars to survive.

Kindred Hospital East Houston and around 46,000 homes were left without electricity during the storms.

Elsewhere in Texas, in San Anontio, a city parade to celebrate the Battle of the Alamo was interrupted as storms also hit that city.

So when will these spring floods in USA end? Who knows? The storms and torrential rain in Texas was caused by low pressure. This weather is now expected to move east to Tennessee and then Georgia and North and South Carolina. These areas can expect to see at least 1 inch of rain, but possibly as much as 3 inches.

Flooding of the Illinois River