Pakistan’s National Disaster Management Authority (NDMA) report that heavy rain and floods have left at least 121 people dead, 127 injured and 857 buildings damaged since 09 March 2016. Many of the victims died when their houses collapsed in floods or landslides.

The rain has been falling steadily since 11 March in many of the affected areas, and accumulated totals have already exceeded amounts normally expected for the whole of March in over 60 locations, according to Pakistan’s Meteorological Department (PMD).

Deaths and Damage in 6 Provinces

Damage and deaths have been reported in several provinces. The administrative division of Azad Jammu and Kashmir suffered some of the worst damage to buildings. NDMA report that 602 houses have been damaged there. Poorly-built homes, particularly in rural areas, are susceptible to collapse during heavy spring rains.

The deaths occurred in the Federally Administered Tribal Areas (38, including 7 in Orakzai), Khyber-Pakhtunkhwa (36), Balochistan (19) Punjab (14), Azad Jammu and Kashmir (13) and Gilgit-Baltistan (1).

Pakistan’s Meteorological Department (PMD) issued a warning yesterday for further heavy rain for later this week as a result of a “fresh westerly weather system”.

In a statement, PMD said:

PMD added “During rains, there will be high risk of land sliding in the vulnerable areas of Malakand, Hazara divisions and Kashmir on Friday and Saturday”.

Event
Pakistan, March 2016
Date
March 9 to March 22, 2016
Type
Flash flood, Inland flood, Landslide
Cause
Extreme rainfall, Long-term rainfall
Heavy rain affected parts of Pakistan from 09 March 2016, causing floods in at least 6 provinces. Pakistan NDMA report that over 100 people have died and over 800 homes damaged as a result of the floods and rain. 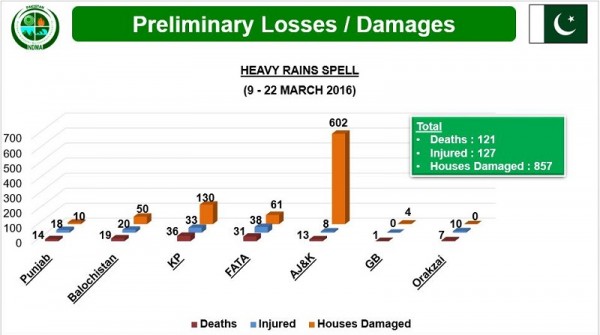 It’s Time to Switch From Managing Disasters to Reducing Risk