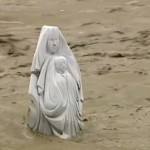 Floods have struck areas of south west France over the last 2 days, in particular the town of Lourdes, the hugely popular catholic pilgrimage site. The floods have so far caused the deaths of 2 people in the region.

The first victim, a woman in her 70s, was swept away by flood waters. Apparently she had returned to the flooded area in her car after first being evacuated. She and her husband wanted to retrieve some personal items from their home, but their car became submerged in the raging flood waters in near Lourdes. The woman was swept away on the fast flowing water. Her husband was later rescued by the emergency services.

Later, in Luz-Saint-Sauveur in the Pyrenees, a man, also in his 70s, was swept away by the high waters of a local stream. The torrential rain had turned the stream into what has been described as a “torrent”. The floods have been caused by storms and torrential rainfall over the last 2 or 3 days, and a longer period of wet weather generally in France. Hautes-Pyrénées and Pyrénées-Atlantiques – 2 departments of France – are on flood alert warnings. Other areas of France are also on alert after torrential storms. Areas of northern France are also suffering from flooding, with storms disrupting flights in Paris, and some places in the Paris area reporting as much as 30cm of rain.

The shrine at Lourdes has been closed since Tuesday. Water in the Lourdes grotto is currently above 1.4 metres, with fears that it could rise to over 3 metres. Lourdes attracts around 6 million visitors each year, many of them pilgrims to the Catholic shrine there, some of them ill and seeking miracles or healing. After the flash flooding there around 200 pilgrims were relocated to safer areas away from the Gave de Pau river.

This is the second time in 2 years that Lourdes has suffered from floods. The town is still trying to recover from the floods of October last year which caused huge amounts of damage. Sadly it looks to be a similar story this year. Not only has the flooding resulted in the destruction of property and infrastructure, but it may also lead to tourists and pilgrims avoiding the town and the shrine form some time. Tourism plays a huge role in the local economy, with thousands of pilgrims making the journey from nearby Spain, or further afield from USA, Italy, Portugal, Ireland and UK. Lourdes plays a big role in France being the world’s most popular tourist destination. 83 million foreign tourists visited France in 2012. A host of international airports, first class highways and railway service, plus transport options from UK such as Le Shuttle or ferries all mean that tourism in France is worth more than 70 billion euros.