Increased sea-level rise and land subsidence in the future mean that 50% more people will be exposed to coastal flooding by 2080, according to a study by scientists in the Netherlands.

Researchers from Deltares and the Institute for Environmental Studies (IVM-VU) have studied the risk of flooding on all coasts throughout the world until the end of this century. The results are presented on April 25 at the EGU in Vienna. The conclusion is that the threat associated with severe storms throughout the world is increasing due to land subsidence and sea-level rise: 50% more people will be exposed to these risks in 2080 than at present. 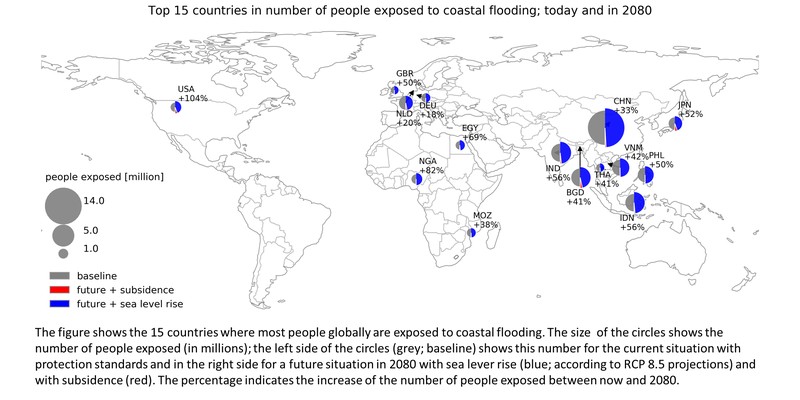 River flooding has already been charted worldwide with the World Resources Institute using the public tool ‘Aqueduct‘ . Dirk Eilander (Deltares) and Philip Ward (IVM-VU) teamed up with other researchers to extend the use of this tool to include coastal flooding and integrate data about changes in seawater levels, as well as global land subsidence in combination with the probabilities of spring tides. For the first time, the researchers have used physically – based models with global coverage to simulate tides and storms at sea. Moreover, a new method has been used to chart coastal flooding worldwide more accurately. The geographical data and elevation data for the coastal areas have been entered accurately in the models used, taking into account steep or gentle slopes and local vegetation. Buildings and population densities on the coasts were used to map out flood impacts. Data of this kind have never been examined before using physical models at the global scale.

The model has been compared with observed floods after the storm Xynthia in France in February 2010 and the comparison produced a good match. By conducting similar analyses in other location s, we expect to be able to map out coastal floods worldwide in a more realistic way. Seawater levels in the future were based on two different scenarios for greenhouse gas emissions since higher or lower concentrations of carbon dioxide, water vapour and methane will affect the climate in various ways, resulting in things like more extreme weather patterns.

Ten per cent of the world’s population live in low – lying areas less than ten metres above sea level. Many of these areas are at risk of flooding. The expectation is that, as a result of sea – level rise and land subsidence, 50% more people could be affected in 2080 by severe floods that typically occur once every hundred years. Population growth and migration have not been included in this estimate. Most potential victims (half of the total number worldwide) are located in four countries: China, Bangladesh, India and Indonesia. Dirk Eilander (a researcher at Deltares): ‘These new figures about coastal flooding provide a good picture of where risk levels are highest around the world. Although some large countries stand out in absolute numbers, the generally smaller island states will be affected most in relative terms.’

The extension of the Aqueduct platfo rm has not quite been completed yet. The platform will be made available to the general public this year. The next steps will include the incorporation of projected increases in population density and economic activity, the effects (in terms of damage and casualties) of the various prognoses and the inclusion of different levels of protection for each country. This will complete the picture: potential flood risks will be linked to the consequences for the safety of local people and damage to their property. As a result, the tool will be suitable for use as a policy instrument for decision – makers working on flood risk management (such as government authorities).