A strong storm system in the Mediterranean, referred to as a ‘medicane’  (MedIterranean hurricane) has caused severe flooding in Algeria, Tunisia and southern Italy. At least 5 people have lost their lives and 2 more are still missing.

Civil Protection in Algeria reported heavy rain and stormy weather across the country from early 23 October 2021. The worst affected provinces (wilayas) include Algiers, Boumerdes, Chlef and Tizi Ouzou, among others. Civil Protection teams rescued dozens of people and helped clear flood water from over 138 homes, 6 of which partially collapsed.

One person died after a vehicle was swept away by flood water in Baba Hassen commune in Algiers Province. A second victim is still missing. Some areas of Algiers city recorded more than 140 mm in 24 hours to 24 October.

Floods also affected several regions of neighbouring Tunisia overnight from 23 to 24 October 2021. Two people died in Thala, Kasserine Governorate, after a car was washed away. A third victim died in similar circumstances in Borj Chakir, a locality near the city of Tunis. Civil Protection teams rescued several people from flood waters in Manouba and Béja governorates. Severe flooding was also reported in Bizerte Governorate.

Two elderly people were missing after being swept away by floods in Scordia comune in the Metropolitan City of Catania in Sicily region. The body of one victim has since been found while search operations including helicopters are continuing. Four people were rescued from floods in Trapani.

Sicily Regions meteorological agency Servizio Informativo Agrometeorologico Siciliano reported 312.2 mm of rain fell in 24 hours to 25 October at a weather station at Linguaglossa, while the station as Lentini recorded 279.8 mm during the same period. 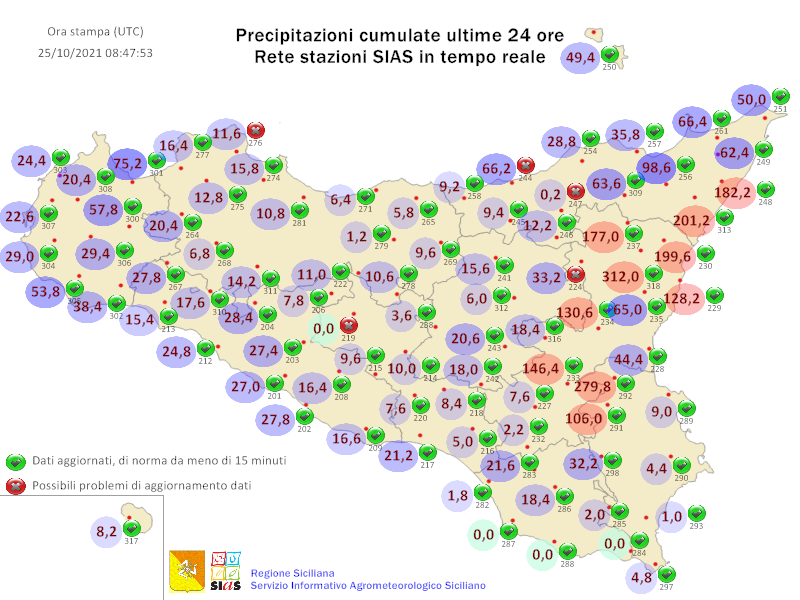