More heavy rainfall in Morocco has prompted authorities to issue high level flood warnings. The severe weather has spread to affect parts of southern Spain, the Canary Islands and Algeria.

Southern parts of Morocco were hit by flooding during the weekend of 22 November 2014. As many as 36 people were killed as a result of flash floods, mostly in the region of Guelmim (south-west, 200 km south of Agadir). Moroccan Red Crescent Society (MRCS) and some local reports say that as many as 20,000 people were left without electricity, roads and bridges destroyed and hundreds of houses collapsed.

The country has since been hit with further heavy rain. According to an AFP report, local weather services in Morocco have reported rainfall figures in Agadir of almost 200 mm in the last 24 hours – over half the annual yearly rainfall. There have also been reports of huge waves along parts of Morocco’s Atlantic coastline.

No fatalities have been reported since the latest heavy rainfall. However, floods in the last 24 hours have caused further damage to roads and bridges. MAP report that roads have been severely damaged in the region of Guelmim, which suffered so badly during the previous floods.

In response to the flood disaster, the Moroccan government has set up an interdepartmental command post in order to monitor the effects of the flooding, which include representatives from the Interior, Health, Infrastructure, Transport and Environment, as well as Representatives of the National Electricity and Water Office.

The command post is responsible for monitoring and assessing the situation in the flood-hit regions and coordinating joint actions for prevention and risk reduction as well as taking all necessary measures to ensure the safety and the protection of the citizens and their properties.

King Mohammed VI has also ordered the Interior Minister Mohammed Assad, and other government representatives, to visit the flood-stricken areas of Guelmim Es-Semara and Souss-Massa-Draa. This delegation is responsible for monitoring the situation in these regions and coordinating the necessary steps to ensure the protection of people and their properties, the ministry said in a statement.

Flood rescues were continuing almost 7 days after the initial deluge. Morocco’s Ministry of Interior said on Thursday that emergency services, which include personnel from the air force and police, have continued to carry out flood rescues and evacuations. The recent rescues were carried out in the regions of Guelmim and Souss Massa Draa. As many as 113 people have been rescued in the last 24 hours, and a total of 545 since the flooding first struck in southern parts of the country at the weekend.

Defending the government’s handling of the floods during a session of oral questions at the lower house the parliament on Tuesday, Interior Minster Mohammed Hassad blamed the drivers of the vehicles. According to local media, he said their decision to travel through the areas threatened by floods, despite warnings issued by the government, is the main cause of the high death toll.

Disasters and Risk Reduction in Morocco

Morocco is one of the Arab region’s most hazard-prone countries and the economy is frequently affected by dry spells, floods, landslides and invasion by locusts. Parts of the country are also exposed to seismic risk; 12,000 people lost their lives in a massive earthquake in the coastal town of Agadir in 1960. Cities and rural communities alike face the danger of sea-level rise and desertification as a result of climate change, according to UNISDR.

According to GRF Davos research, flooding is by far the most costly of all hazards in Morocco. GRF Davos say that flooding causes around $0.44 billion in losses each year.

In 2012 the Moroccan government took steps to create a National Platforms for Disaster Risk Reduction to support policies for building resilience to disasters.

“The future National Platform will help the work of all sectors to converge into one common objective, which is to construct a country that is safer for current and future generations,” said Mehdi Chalabi, Director of Surveillance and Prevention of Risk at the Department of Environment.

By 2014, Morocco became the first African country to receive UN INSARAG certification of classification for complying with the United Nations standards on disaster management, delivered by the International Search and Rescue Advisory Group (INSARAG). 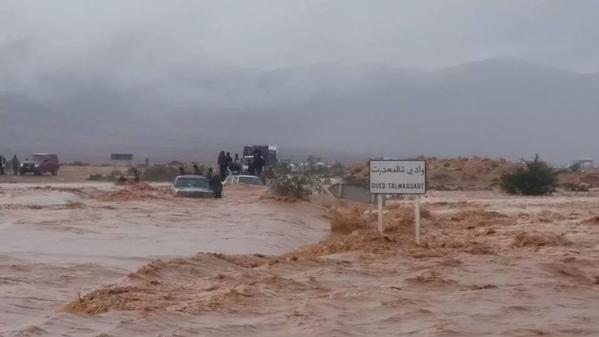 Three Months of Flooding and Isolation in La Leona, Paraguay