Kenya – Bus Swept Away by Floods in Mandera County

Floods may have claimed yet more lives in Kenya, this time in Mandera County in the north of the country.

A 60 seater bus has been swept away by a swollen river at Gadudia, about 35 km from Mandera Town. The river in the area has been described as seasonal.

The Kenya Red Cross reported the incident earlier today. Emergency rescue teams, including members of the Red Cross, military and local authorities, managed to pull 42 people from the flood waters.

There are unconfirmed reports that at least 3 people are still missing. Rescue teams are still operating in the area, presumably searching for the missing three.

Parts of southern Kenya have experienced floods over the last few days, where as many as 13 people died in the last 2 weeks.

Seasonal rivers, such as the one at Gadudia, often present problems for drivers. Crossing dry rivers at other times of the year is commonplace, and sudden fast flowing flood waters may take drivers by surprise.

The problem is often exacerbated be the lack of alternative crossing points, prompting drivers to take risks, particularly drivers of commercial vehicles under heavy time constraints.

Fourteen people died after a bus was swept away by the flood waters of a wadi in Morocco in November 2014. At least 28 of the 32 people who died in the November 2014 floods in Morocco were in vehicles crossing wadis at the time. 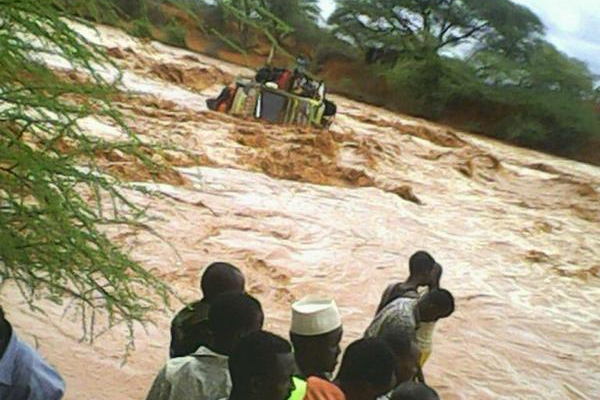