Hurricane Fiona dumped more than 25 inches / 635 mm of rain as it made its way across Puerto Rico. At least 2 people lost their lives in the storm in Puerto Rico. Fiona later made landfall in the Dominican Republic, triggering further flooding.

Strong winds and heavy rains caused widespread damage to homes, roads, bridges as well as power and water infrastructure, leaving thousands without power or running water. At one stage only 30% of the island had running water.

Authorities reported 2 storm-related fatalities. One person died in flood waters in the town of Comerio. Another person died after an accident with a power generator in a home in Hato Arriba in the municipality of San Sebastián.

Puerto Rico Governor Pedro Pierluisi said more than 1,000 people were rescued by emergency crews across 25 municipalities. As of 19 September 2,146 people had evacuated their homes and moved to relief shelters.

Images from the National Weather Service (NWS) in San Juan show Hurricane Fiona brought more that 25 inches / 635 mm of rain to southern parts of the island from 17 to 20 September 2022.

As of 20 September the the Rio Guanajibo near Hormigueros remained above Moderate Flood Stage. All other rivers however had fallen to below Minor Flood Stage or below.

Fiona made landfall in the Dominican Republic early on 19 September 2022 bringing heavy rain and strong winds. The town of Miches in El Seibo province recorded 279.4 mm of rain on 18 September.

Authorities reported damage to water infrastructure as well as dozens of homes. Around 500 people have moved to shelters. Local media reported one person died as a result of wind damage.

Heavy rain and strong winds brought by the then Tropical Storm Fiona caused damage in the island group of Guadeloupe from 16 September 2022.

One person died after floods from the overflowing Rivière des Pères in Basse-Terre destroyed a house. Flooding was also reported in Capesterre-Belle-Eau, Sainte-Rose, Baillif and Vieux-Habitants. Around 50 people were evacuated. Emergency services carried out 151 interventions. Thousands were left without electricity.

On 20 September the National Hurricane Center (NHC) reported that Fiona became a Major Hurricane as it approached the Turks and Caicos Islands. Fiona is the first Major Hurricane of the 2022 Atlantic Hurricane Season. 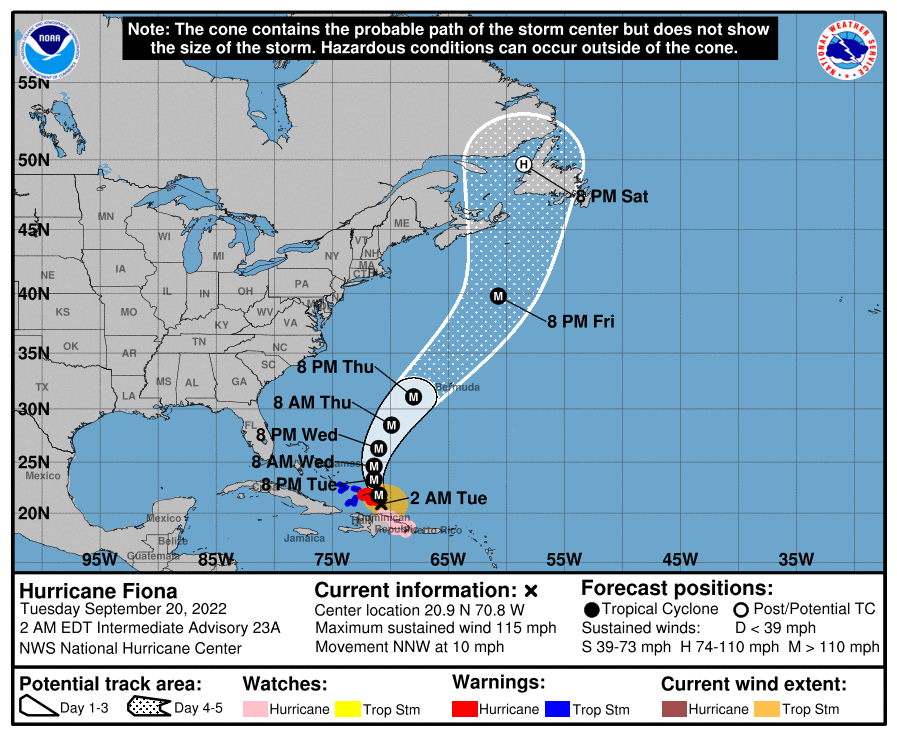