The Paraguayan Red Cross is carrying out response operations following the recent floods that have affected the southern part of the country and left more than 200,000 people homeless. 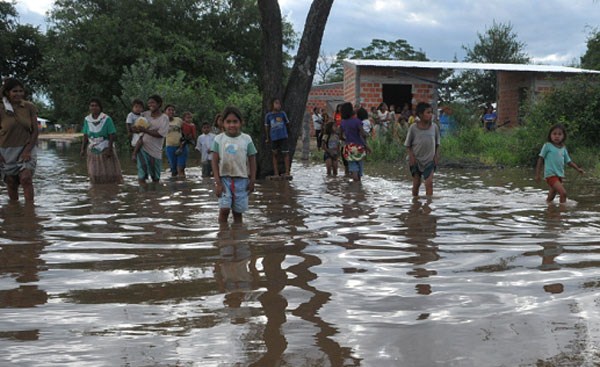 In Asunción, flood levels like these have not been seen since 1983. The rise of the rivers, constant rain and the cold have come together affecting both urban and rural communities and leaving more than 200,000 people homeless. There is little access to food, and livelihoods are in danger. Flood waters have forced many to leave their homes with what little they have left on their shoulders. Some of the families seeking refuge have built temporary shelters made of collected wood, discarded poles and metal roofs.

More and more people are occupying free space with permission from the Municipality, others are settling on the sidewalks. The risks are increased by sanitation access problems caused by a shortage of portable toilets.

The International Federation of Red Cross and Red Crescent Societies (IFRC) has launched an international emergency appeal for 1.8 million Swiss francs, in order to support the Paraguayan Red Cross in their efforts to respond to the needs of 22,500 people with water distribution, sanitation and hygiene support livelihood recovery and disaster preparedness.

The IFRC has also deployed a Regional Response Unit staffed by water and sanitation  specialists and has released 519,935 Swiss francs from its Disaster Response Emergency Fund to support the Paraguayan Red Cross response operation.

Since the flooding began, the Paraguayan Red Cross has been providing support to the affected population and is raising funds and collecting in-kind donations through campaigns like TOGETHER FOR ÑEEMBUCU which started in March, and the S.O.S PARAGUAY CAMPAIGN which started in May. “The campaigns call on the population to donate non-perishable food and blankets. We have been able to share our message on several media outlets to ask for any and all support from citizens to help the affected people,” said Celeste Lara Castro, Director of Cooperation for the Paraguay Red Cross.

“In our travels with the Regional Response Unit, we were able to see, week by week, day by day, how the places we walked through during the last evaluation visit are now under water.”

Increasing needs have also prompted the mobilization of two members of an IFRC Emergency Response Unit, which is now in the field supporting the Regional Response Unit and Paraguay Red Cross.

“We have deployed our specialists in water and sanitation as well as shelter and human settlements to support the response operation and plan for the recovery process, which we recognize will take time and will require more resources on the part of the state, humanitarian actors and the private sector,” said Benoit Porte, IFRC’s Pan-American Disaster Response Unit Coordinator.

The rains are still falling, and the support to the affected population remains dependent on limited resources. Therefore the continuity of this humanitarian operation, especially its recovery phase, will depend on the support that can be garnered through the international emergency appeal.

For more information, or to set up interviews, please contact:

The International Federation of Red Cross and Red Crescent Societies (IFRC) is the world’s largest volunteer-based humanitarian network, reaching 150 mil­lion people each year through its 189 member National Societies. Together, the IFRC acts before, during and after disasters and health emergencies to meet the needs and improve the lives of vulnerable people. It does so with impartiality as to nationality, race, gender, religious beliefs, class and political opinions. For more information, please visit www.ifrc.org. You can also connect with us on Facebook, Twitter, YouTube and Flickr.