While the levels of the Mississippi River are rising quickly to flood stage, residents and businesses of Clarksville, Missouri have been told there is no money available for flood-fighting efforts. If the floods come, they are on their own. This year the town board has voted not to fund flood protection efforts, like sandbagging

“The city has no funding to deal with this flood. Individuals and business owners are on their own.”

“It’s a wrenching decision because you just stand here and watch and think I can’t just watch the town go under and do nothing,”

The town currently has a population of around 442 (as of 2010). There are over local 40 businesses situated in the town, including medical centre, post office, bank, various shops, lodgings and eateries.

Clarkesville is situated right on the banks of the Mississippi, at one of the widest points of the river. In fact it is considered to be one of the best vantage points to enjoy wide open views of the river and beyond. The town overlooks U.S. Lock and Dam 24, which offers a fine vantage point to view river boats and barge traffic, and to look across to Illinois on the other side.

Sadly, the town’s location also means it is at risk of flooding, which has occurred on a regular basis. Each year the town has spent between $400,000 and $700,000 on sandbagging operations. The financial situation is so dire this year that residents and businesses are using what was left over from last years flood – sand, sandbags, barricades. The town is also is trying to recruit the help of AmeriCorps and local prisoners to help fill sandbags.

Perhaps the experience of Clarksville points to some of the problems with relying on outdated sandbags for flood defence. Sandbags are expensive, require huge amounts of labor, and they are short term.  There are plenty of modern temporary flood defence solutions that can be used again and again. See our report on some alternatives to sandbags here.

The river is expected to crest at around 33.9 feet – well into major flood stage – some time late on Tuesday 9 July.

The floods came earlier last year, starting around the end of May, although the river levels were remarkably similar.

The flooding in 2013 lasted several weeks and it wasn’t until July that the flood defences could be brought down.

Local resident, Hanna L Greenwell , has set up a campaign to help find some funds for fighting the Clarksville floods.

This is to help fund the saving of Clarksville, Missouri. Private citizens are fighting the flood for the national historic district. Due to financial restrictions and other circumstances the city cannot afford to sandbag for the upcoming flood. We are asking for donations to buy supplies to help save this little town. We appreciate any help we can get and all donations are welcome. Thank you for your time. 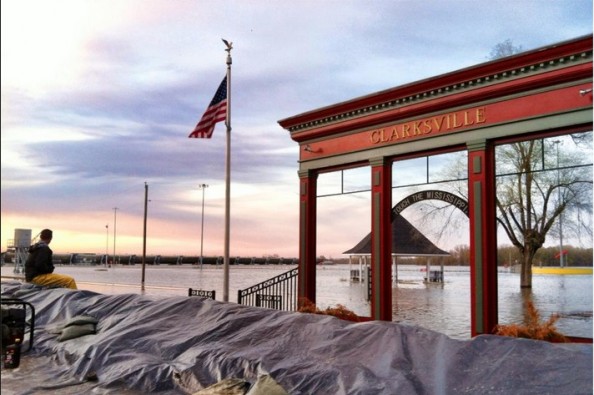