Torrential rain has caused severe flooding in Texas, claiming the lives of at least two people. Rescue services have spent the day rescuing residents who are trapped by the floods in San Antonio.

Much of southern Texas has been hit. Flash flood warnings have been issued for more than 20 counties as torrential rain led to widespread flooding. Flooding is particularly bad around the San Antonio area. Nearly 40 cm of rain has fallen in some parts of the city since early Saturday May 25. The San Antonio river levels are reported to be at around 11 metres and a flood warning has been issued. It is believed that the levels will reach much higher after such torrential rainfall, with some experts warning the river levels could reach above 20 metres in the forthcoming days.

Leon Creek levels were around 27 feet (10 metres), almost twice the 15 feet flood stage. Flood warnings have also been issued for the Medina River and Salado Creek

Rescue team were working hard, many having to use inflatable boats in order to reach stranded people. The rescue services were urging people to be patient as they were inundated with calls for help. For example, the San Antonio Fire Department had received 683 calls for help in the first few hours of Saturday, with over 200 of the calls described as “water related incidents” where rescue services helped to pull people from flooded homes or cars.

Many drivers were caught out and stranded in the flood waters, despite warnings to leave their vehicles at home. A woman is believed to have been killed when her car was washed into a creek in the San Antonio area. The Mayor of San Antonio, Mayor Julian Castro was imploring people to stay off the roads where possible.

“We’re asking folks to observe low-water crossing (warnings), to use common sense and to stay off the road if possible,”

“Turn around and don’t drown,” was the message from various officials during the flash flooding. We have discussed the Turn Around Don’t Drown campaign in an earlier article here.

Power for around 12,000 homes was knocked out and many streets in San Antonio were closed. Torrential rain and the ensuing floods was accompanied by strong winds, with one tornado being reported in the Bexar area, west of San Antonio. 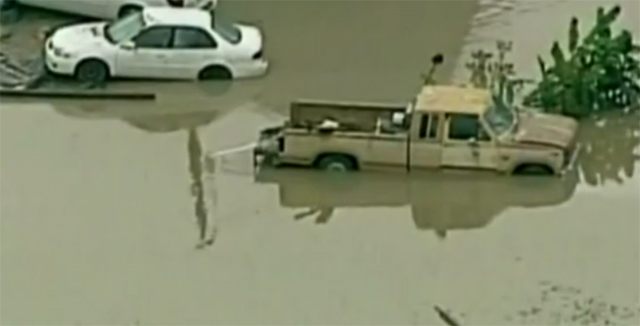 Texas suffered from flash floods late in April 2013, where Houston was mostly hit. San Antonio suffered from terrible flooding in October 1998 where 11 people died. Other areas in southern Texas were also hit resulting in 31 deaths overall, 17 of which were in vehicles.