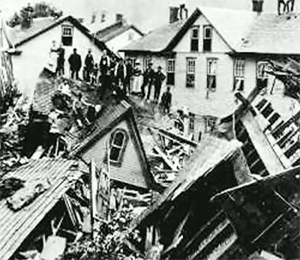 In our look at the some of the worst floods of the past, below is an overview of the fascinating story of the Johnstown flood of 1889 which was also known as the Great Flood of 1889. It was caused by a massive failure of one of the local dams, the South Fork Dam, which lay fourteen miles north of Johnstown itself. In the days running up to the flood, the area had experienced incredibly heavy rainfall.

When the dam broke, a wall of twenty million tons of water (the equivalent of all the water in the Mississippi river) surged from Lake Conemaugh towards the local towns. Over two thousand two hundred people lost their lives, and seventeen million dollars worth of damage was done to the area.

During May that year, a huge storm hit Kansas and Nebraska, as it moved east to Johnstown, they experienced an enormous downpour of ten inches of rain in one day, the largest ever recorded at that point. Rivers burst their banks and the result was trees being torn from the ground and power lines being toppled. By the 31st, the South Fork Dam was about to burst, as the spillway was clogged. A local farmer who lived near the site saw this and with a team of men, tried to unblock the spillway and dig another spillway, but the dam wall was eroding at an alarming rate. At around 3pm that day, they dam finally gave way under the pressure of all of the extra strain, and within forty minutes, all of the water had cascaded into the nearby towns. 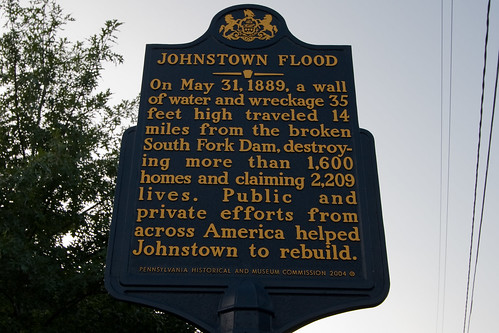 The first place that was devastated by the wall of water was South Fork. Luckily, the town itself was on a hill, so the inhabitants were able to see the wall of water approaching. Although around thirty houses were ruined, only four people lost their lives.

However, as the water picked up momentum, it also collected debris which stopped the flood for a moment when it reached the arch of the Conemaught Viaduct. But it took only seven minutes to loosen and continue on its way to Johnstown, with more momentum from the water behind it. With this new force, one small town was totally wiped out, leaving only rock behind.

Johnstown was hit just under an hour after the dam broke, and no-one was prepared. The water was going at forty miles an hour and was sixty feet high. Debris crushed many, others were killed on impact, and most drowned. Any who managed to reach high ground had to wait hours for help. A second wave his the city from another angle, due to a temporary dam of debris holding back some of the water.

Here is a video showing a simulation of the da break and flood:

The American Red Cross were first on scene, and as they were relatively new at this point in time, the Johnstown Flood was their first key relief mission. People from all over the USA and the world offered support for those affected by the disaster.

A huge downside during the aftermath was that many of the victims were unable to claim damages from the owners of the dam. The outcry from the public from this caused laws in the US to change.

The Johnstown Flood of 1889 has since been immortalized in a book of the same name by David McCulloch. You can read reviews and more about the book at Amazon here.

What Should My Flood Insurance Cover?