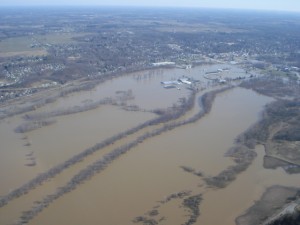 Springtime is here, and sadly that usually means floods for wide areas of the Midwest.

So far the states of Indiana, Illinois, Michigan and Missouri have been the areas most badly affected. The floods have been caused by heavy rainfall – many weather watchers are saying the rainfall is at record-setting levels – which in turn is making rivers in the Midwest, notably the Illinois and Mississippi, burst their banks.

At the time of writing there have been reports of at least 3 deaths due to the flooding, with 2 more deaths unconfirmed. One of the confirmed deaths was in Missouri, the other two in Indiana. It is understood that all 3 victims were in their cars at the time, with the two deaths in Indiana occurring at Cicero Creek. The deceased were most likely caught up trying to escape flood waters when their vehicles were lifted to float on the water and were swept away. Two drivers also died when their cars were swept into, killing two

Weather forecasts aren’t looking good for the area and more heavy rainfall is expected. Furthermore, river levels could rise as a result of snow melt from North and South Dakota and Minnesota.

Flooding has hit rural communities and agriculture hard, but it has also affected urban areas too as can be clearly seen in this remarkable photograph:

The Chicago area, along with the rest of the state of Illinois have been hit so hard that Pat Quinn, the Illinois Governor has declared a state of emergency.

Other rivers apart from the Illinois and Mississippi were also reaching frightening levels. For example the Grand River at Grand Rapids, Michigan, water levels stood at just under 22 feet – the highest level ever, and well above the previous record level of 19.64 feet of 1985. It is understood that 18 feet is the flood stage for the Grand River.

In Indiana, the Wabash river rose a staggering 14 feet at the height of the storms. This is the highest recorded level since 1958. in Indiana were also evacuated. Communities along smaller rivers have also been affected as ABC7 Reports:

In Indiana, high water was topping levees in the Terre Haute area. Vigo County Emergency Management Agency Deputy Director J.D. Kesler said late Sunday afternoon the barriers haven’t failed yet but that some evacuations will be necessary if levees fail in the western Indiana county.

In Grand Rapids, Mich., Mayor George Heartwell declared a state of emergency as the flooding Grand River poured into the basements of several hotels and other downtown buildings.

The recent storms and floods come on the back of a drought for some of the Midwest. The Mississippi River water levels have been so low for most of the winter it was even considered that river barge traffic may have to be stopped.