In India, the state of Gujarat has announced that it is close to completing its pilot trial of a new flood mapping project in the Mahi river basin. Once the initial project in Mahi has been fully carried out and assessed, the flood mapping will also be implemented for the Tapi, Sabarmati and Damanganga basins. It is hoped that the project will help curb damage done by floods in the region.

At the heart of the project is the use of GIS (geographic information system) in assessing the flood risk to selected areas of the state, therefore giving authorities better warning and longer times to prepare for flooding.

“We are currently analysing the spread of water when released from dams. Suppose one lakh cusecs (100,000 cubic feet per second) of water is released, we must know where it will spread and to what extent will it cause flooding. Similarly, we will study the changes when larger volumes are released….once the spread pattern is verified, the new contours will be placed on a fresh GIS map of the basin.

“The exercise has been under way for the last few months and we are near completion. This is an important step towards mitigating the threat of floods. We began with Mahi because the basin is close by and comparatively easy to start with.”

Perhaps the gujarat flood maping project is a sign that Indiam authorities are beggining to take flood preparedness more seriously. Yesterday I wrote how greater co-operation is needed to develop better flood warning systems in the region. After the success of the flood mapping project in Gujarat, hopefully the next step will be greater sharing of data across states and countries in order to protect the South Asian population from any repeat of the flood diasters seen in recent years. 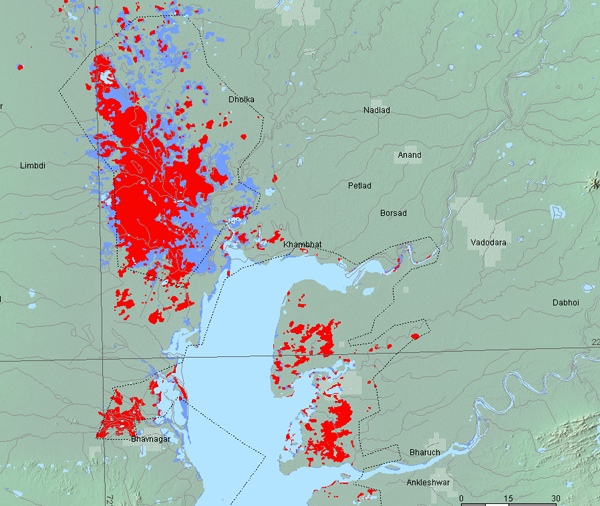