The severe floods that struck in parts of Iraq during late October and early November 2015 have unearthed landmines and other explosive remnants of war (ERW) in Diyala Governorate, according to the Iraqi Red Crescent Society (IRCS).

Torrential downpours that started in late October caused flooding in many parts of the country, including around the capital, Baghdad, and Diyala Governorate, which extends to the northeast of Baghdad as far as the Iranian border.

More than 80,000 people were displaced and sheltering in around 40 sites and camps across the country, according to the UN Office for the Coordination of Humanitarian Affairs (OCHA). The floods prompted authorities to declare a state of emergency on 01 November 2015.

At least 58 people had died in the floods across Iraq, the country’s Health Ministry has said on Friday 06 November 2015.

The images below show the extent of the flooding and the areas affected, notably eastern parts of Iraq which sit along the border with Iraq and the Zagros mountain range. The nearby Iranian provinces of Ilam and Lorestan were also affected by flooding, according to International Federation of Red Cross and Red Crescent Societies (IFRC). 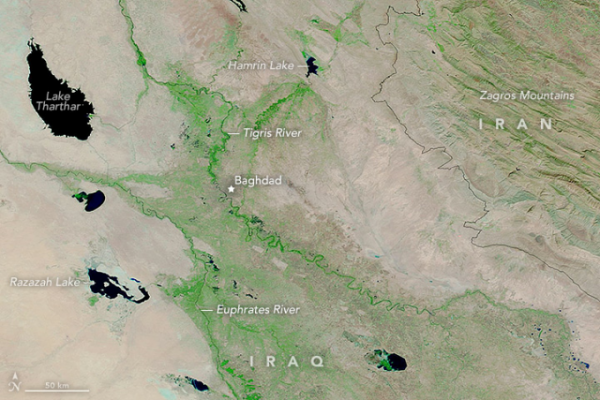 Iraqi Red Crescent reported earlier this week that the flooding has caused damage in villages near to the Iranian border as well as the displacement camps in Diyala. Farmland and roads have also been damaged.

Haider Ahmed from Iraqi Red Crescent said: “Our relief teams have managed to deliver relief items, food, health materials and blankets to more than 350 families who were trapped by floods in Qazania and Daliabbas.”

Roads are so badly damaged, Iraqi Red Crescent teams have had to work on opening alternative routes.

The recent flooding in Diyala has unearthed landmines and other explosive remnants of war (ERW),  according to Iraqi Red Crescent, although no exact figures or locations could be given. IRCS say that their teams in Diyala are carrying out awareness campaigns for residents in affected areas of the province regarding unearthed mines and explosives.

In similar circumstances, floods in Bosnia during May 2014 were said to have dislodged thousands of landmines from the 1992-95 war. At the time, Yuri Afanasiev, UN Resident Coordinator to Bosnia and Herzegovina, said:

“Years of work to clear landmines and mark minefields could be in jeopardy as the flooding inundates the country, shifting mines from the ground and removing signs and markings.”

“A mine is like a stone, easily transported by fast waters, so there is a real risk minefields may have migrated into new areas. We are now faced with the problem of determining where the new minefield borders are.”

Floods in Mozambique during 2000 swept away old land mines which then began to appear in previously non-contaminated areas, according to Human Rights Watch.

There are also examples of floods shifting land mines and munitions in Korea and Vietnam. According to the Human Rights Watch report:

In central Vietnam, mines and UXO that were once 4-12 inches below the surface shifted during severe flooding in November-December 1999. The BLU 26/36 “bombies” and 40 mm grenades were most susceptible to shifting, as well as being responsible for a large number of casualties; this phenomenon is blamed for at least 3 deaths last November