Sand Engines in the Netherlands

A few days ago we wrote about the project in the Netherlands called (in English) “Room for the River”. It’s a large project taking place in the Netherlands, Germany, France and Switzerland, to with numerous different measures to help protect people and properties from the flooding of nearby rivers such as the Rhine.

At the heart of the project is a philosophy of working with nature, and allowing room for the river and high waters. Rather than simply build bigger and higher dikes and dams, the project involves finding spaces, floodplains, where any flood waters water can be drained safely and efficiently into these areas.

This philosophy is all part of the future for flood protection in the Netherlands, which encompasses a return to basics: utilizing natural materials, mimicking the systems of the natural world, and using the power of nature to offer protection form floods.

The Netherlands’ system of dikes and sea gates has long been the best in the world. But as the country confronts the challenges of climate change, it is increasingly relying on techniques that mimic natural systems and harness nature’s power to hold back the sea. 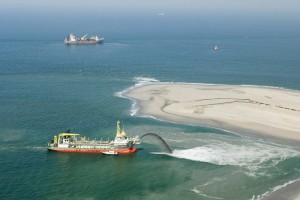 So further to our look at how we can work with mature to prevent or minimise the effects of flooding, I wanted to take a look at more examples from the the Netherlands, and came across the “sand engines” or “sand motors”.

The project is in operation along the coastline at Ter Heijde, near a town called Monster, near to the Hook of Holland in the southern part of the Netherlands. In essence, the project entails dumping huge amounts of sand along the coastline. This first began in 2011, and it is aimed to be repeated roughly every 5 years.

The sand is dredged from the North Sea and brought on to land where it is deposited along the coast through pipelines. Once the sand is deposited it is moved around gradually (but naturally) by the elements and spreads along the coastline. Gradually the sand becomes part of the existing sand dunes, building them higher and strengthening them further. The end result is a wider and safer natural beach and sand dunes that can protect the nearby residents from any sea surges and flooding, such as the North Sea floods of 1953 and 1962.

The Dutch water Board (Rijkswaterstaat ) said:

“nature will take the sand to the right place for us.”

Eventually the sand will spread along a 20km stretch of coastline, at a cost of just over $90 million.

Here is a video model simulation of the sand engine in action:

And here’s a further video, this one of the actual sand dunes:

Room for the River

One thought on “Sand Engines in the Netherlands”