2007 is regarded as one of the worst years in recent times for flooding in the United Kingdom. Much of the flooding occurred during a period between June and July. The most affected region was England, especially the southern parts, although Licolnshire and Yorkshire in the north of England, Wales (especially the south) Northern Ireland and Scotland (especially the Lowlands), were aslo badly affected. Thousands of people were forced to leave their homes. Road and rail networks were severly disrputed, and agriculture and crops in various regions were devestated.

The floods were a result of the huge amounts of rainfall in the UK for May, June and July of that year – some of the wettest months on record, with double the normal or average amount of rain. Across the United Kingdom, the June rainfall was around 14 centimetres, and another 12 cm in July.

The Environment Agency, a governemt department, described the flooding and huge rainfall “phenomenal”. A spokesman from the agency said:

“We’ve had a sixth of the annual rainfall in 12 hours. Climate change experts tell us that this is the sort of thing we need to expect for the future.”

Overall the floods were estimated to have cost around £6 billion (UK Pounds) in damage, and the military service were required to help the clear up programme. Later the military services described the task as one of the largest rescue efforts they have ever carried out during peace time.

The photo below shows the train tracks just along from the mainline train station in Newbury, Berkshire. This is the south east of England, one of the most densely poulated areas in Europe. 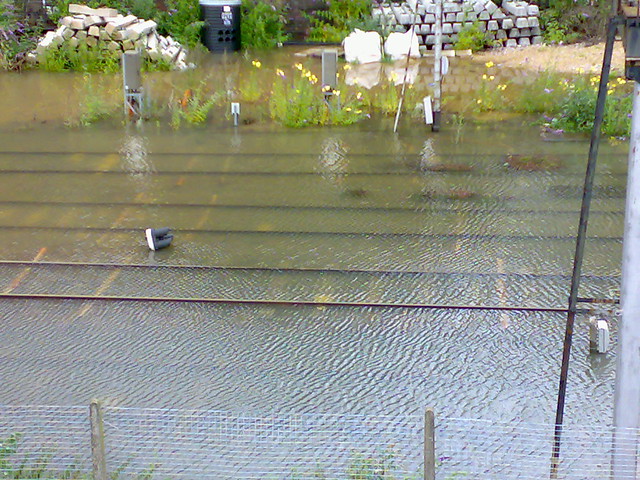 Further floods were to hit Britain in 2009.