Do I Need Flood Insurance?


It’s a good question, and perhaps one one the minds of many home owners in the United Kingdom in recent years. Huge parts of the British Isles have been hit by floods in recent years. In 2007 there were torrential downpours that led to flooding across all the countries of the united kingdom. In England alone, it is believed that there are over 5 million homes and businesses in potential flood areas. Many of these 5 million properties are at risk of floods from rivers of, being in coastal regions, the sea. However an estimate of around 3 million properties are at risk of floods from surface water alone. 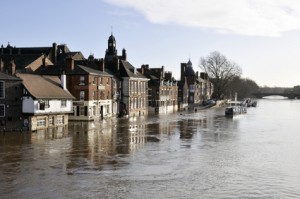 Flood damage can be one of the worst disasters for you and your property to suffer. Damp can take weeks if not months to get rid of. Flood water can wreak havoc with the exterior and interior walls and doors of your building, as well as all the possessions inside. You might have to look at replacing a whole range of items, from furniture to carpets and even a replacement kitchen. Things might be so bad that you simply are unable to live in your flooded home for quite some time, bringing costs of temporary accommodation. In fact the British insurance industry estimated that the average claim on insurance that has suffered flood damage is about £18,000. Could you afford not to have flood insurance?

The United Kingdom is quite unusual in that, until this point in time at least, flood damage has been included as standard in most cases as part of buildings and contents insurance. If you have a mortgage on your home, then you will be required by the lender to have some form of buildings insurance already in place. This will offer protection from such things as fire damage, but in most cases, flood damage too. Home owners would also be wise to take out some form of house contents insurance as well. Again, in most cases, this will include damage or loss of your home’s contents in the event of a flood. It is always best to be 100% certain about what your insurance covers. If you aren’t, then it is advised you contact your insurance company or broker.

However, flood insurance issues are on the verge of a big change in the UK. Possibly. The things is, we just don’t know as yet. After the terrible 2007 floods, the UK government and the group representing British insurance companies – the Association of British Insurers (ABI) – got together to work on a strategy to help keep insurance policies for home owners in flood plains at a reasonable costs. That deal was agreed to last 5 years, and is due to end in June 2013. This means that insurance companies are looking a lot more closely at whether your property – be it a residential home or business premises – is at risk of flooding.

So how can you know if you are likely to be one of those living in a property considered to be a flood risk? How do you know if you need flood insurance for your home? Well, it’s fairly straightforward really. You yourself will probably know if there has been any history of floods in recent times in your local area, or indeed in your home. Further than that, home owners in England and Wales can use the Environment Agency’s flood map here to check if they live in an area prone to flooding, and if you are in Scotland, the Scottish Environment Protection Agency has something similar here. It’s a fairly safe bet that insurers would do the same thing, so arm yourself with the same information they have.

What Should My Flood Insurance Cover?