JFK, La Guardia, Newark, Gatwick, Fiumicino Rome, Indira Gandhi International, Don Muang Bangkok – all of these large international airports have suffered from flooding in the last 3 years. Yesterday was the turn of Penang International in Malaysia.

Penang is Malaysia’s third busiest airport. Last year nearly 5.5 million passengers used the airport, which dealt with over 60,000 aircraft movements. It boasts a string of awards and a host of prestige international airlines among its carriers.

But standing at an elevation of 3 metres and located in an area known for heavy monsoon rainfall, Penang is also extremely prone to flooding.

Yesterday it flooded for the sixth time this year. Parts of the airport terminal were said to be ankle-deep in flood water. Worse still, the flooding affected the runway. Flights were grounded and landings delayed as all aircraft movement was stopped for around 1 hour.

Although the flood water soon receded, there has been an outcry about the regular flooding at the airport. Quoted in the New Straits Times, State Public Works, Utilities and Transportation Committee chairman Lim Hock Seng said the current capacity of the drainage system was no longer able to cope with high volume of rainwater, especially during a downpour.

Planned flood mitigation work, which is to include a water retention pond, is yet to be completed. Malaysia Airports Holding Berhad (MAHB) have been blamed for not completing an ongoing flood mitigation project to minimise water overflow from the drainage.

Of course, Penang isn’t the only major airport to face the threat of flooding. Several airports in Europe, USA and Asia have recognised the threat posed by floods and some, such as New Orleans (MSY), San Francisco, LaGuardia and Gatwick have started work on flood protection efforts.

Gatwick, the UK’s second largest airport, suffered from flooding during the UK floods and winter storms during 2013 and 2014. The airport has since been working on flood alleviation plans.

In the USA, New York’s main airports — JFK, LaGuardia and Newark — flooded in October 2012 as a result of the tidal surge from Hurricane Sandy. LaGuardia closed for three days. The airport has since announced $37.5 million in improvements in flood and storm surge protection.

According to the US government’s recent climate change report at least 12 of the country’s 47 largest airports are vulnerable to storm surges and flooding. Those airports include:

In Australia, Rockhampton saw its regional airport all but disappear under the mass of water of the overflowing Fitzroy River during the Queensland floods of 2011.

In India, Indira Gandhi Airport (IGI) airport in New Delhi has flooded twice in recent years, in June 2013 and also back in September 2011. In Mumbai, the floods of 2005 caused Chatrapati Shivaji International Airport to close for over 30 hours.

In Thailand, Bangkok’s Don Muang Airport flooded in October 2011 during a period of high tides. 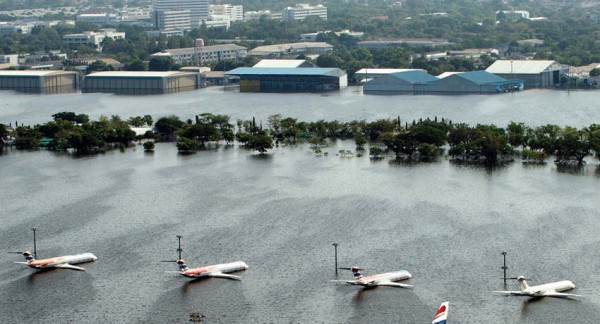 Chihuahua International Airport in Mexico flooded in July 2013, and Fiumicino airport in Rome and was under water after the storms in Italy during November this year. Beirut airport seems to close every time it rains.

We cannot vouch for the authenticity of the photo below, but it seems that some would like Manila airport to be included in a list of flood prone airports.