Exceptionally Strong El Niño Has Peaked but Impacts to Continue

The World Meteorological Organization (WMO) said in a statement of 18 February, 2016, that the powerful 2015-2016 El Niño has now passed its peak.

El Niño reached its peak ocean surface temperature during November and December, but has since declined by about half a degree.

However, the WMO warned that it still remains strong and will continue to influence the global climate for the time being. It is expected to weaken in the coming months and fade away during the second quarter of 2016.

Eastern and central tropical Pacific Ocean surface temperatures were more than 2 degrees Celsius above average in late 2015, providing evidence that the 2015-16 El Niño is one of the strongest on record, comparable with the 1997-98 and 1982-83 events. It is too early to establish conclusively whether it was the strongest.

“We have just witnessed one of the most powerful ever El Niño events which caused extreme weather in countries on all continents and helped fuel record global heat in 2015,” said WMO Secretary General Petteri Taalas. “In meteorological terms, this El Niño is now in decline. But we cannot lower our guard as it is still quite strong and in humanitarian and economic terms, its impacts will continue for many months to come,” said Mr Taalas.

“Parts of South America and East Africa are still recovering from torrential rains and flooding. The economic and human toll from drought – which by its nature is a slowly developing disaster – is becoming increasingly apparent in southern and the Horn of Africa, central America and a number of other regions,” he said.

“The world was better prepared for this event than ever before. Scientific research conducted during this event will enhance our understanding of El Niño and the inter-linkages between this naturally occurring climate phenomenon and human-induced climate change,” said Mr Taalas. “Lessons learnt from this El Niño will be used to further build our resilience to weather related hazards, which will increase as a result of climate change.”

WMO, the UN’s authoritative voice on weather, climate and water, says that the 2015-2016 El Niño has been associated with a number of major impacts, in particular in South America.

El Niño has had a major impact on a number of South American countries and was linked to severe flooding in Paraguay and other countries in December 2015.

In its latest outlook, the International Center for the Investigation of El Niño (CIIFEN), predicted a high probability of above average rainfall in February-March-April in Mexico, northern Peru, coastal Ecuador, central and eastern Paraguay, southeastern Brazil, Uruguay and northern Argentina.

Elsewhere, El Niño has resulted in lower than average rainfall. In Central America, El Niño was associated with serious drought in Guatemala, Honduras and El Salvador. Some Caribbean countries have also suffered drought. More details here In Southern Africa, below average rainfall was reported in a number of countries, including Lesotho, Malawi, Mozambique, South Africa, Swaziland, Zambia and Zimbabwe. Localised heavy rainfall resulted in flooding in parts of Mozambique and Madagascar while other parts of those countries were suffering drought. 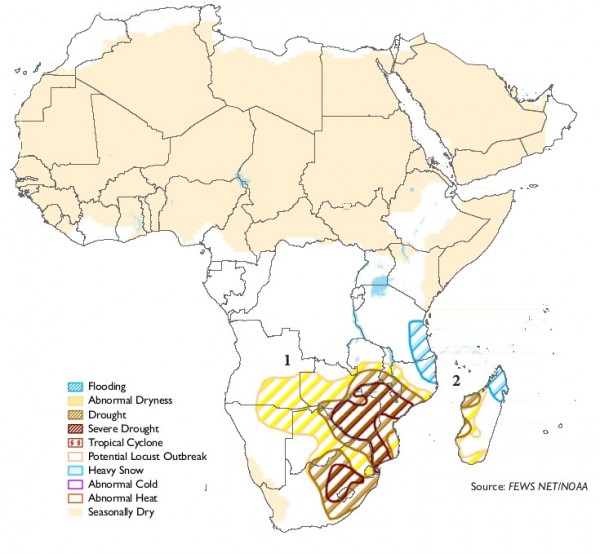 In South Asia, the India Meteorological Department reported that the June-September rainfall over India as a whole was 86% of its long period average. El Niño is believed to have played a key role in the rainfall deficit.

The El Niño-Southern Oscillation (ENSO) phenomenon is the result of the interaction between the ocean and atmosphere in the east-central Equatorial Pacific. It has an irregular recurrence period of between two and seven years. Typically, El Niño peaks late in the calendar year, hence its name (Spanish for Christ Child). It causes droughts and excess rainfall in different parts of the world.

The WMO Update said that models indicate a return to an ENSO neutral state during the second quarter of 2016. It is too early to predict whether there will be a swing to La Niña (the opposite of El Niño) after that.

It is important to note that El Niño and La Niña are not the only factors that drive global climate patterns. For example, the state of the Indian Ocean (the Indian Ocean Dipole), or the Tropical Atlantic Sea Surface Temperature, are also capable of affecting the climate in the adjacent land areas. Northern hemisphere winter conditions are influenced by the so-called Arctic and North Atlantic Oscillations.