Underground flood tunnels are expensive mitigation options that divert river flows around important communities, re-releasing the flow downstream. Costs of flood tunnels vary depending on size and materials used. Following the June 2013 flooding in Alberta, Canada, by the Elbow River, plans are in motion for a 6km long, 8m wide flood diversion tunnel in Calgary, at a cost of between $200m and $300m.

A much larger and complex underground floodway system was built in Tokyo, Japan at a cost of $3bn. In comparison, underground flood tunnels built in San Antonio, Texas, cost $111.4m for a larger tunnel that is approximately 16,200 feet (4.9km) long and which took 13 years to build, and $38.8m for a smaller tunnel that is approximately 6,000ft (1.8km) long and took 10 years to construct.

Two flood tunnels in the USA indicate the range of issues and views that have to be taken into account when planning for these major infrastructure projects, the Waller Creek Flood tunnel in Austin, Texas, and the proposed Passaic River Flood Tunnel in New Jersey.

In Austin, Texas, construction commenced on the Waller Creek Flood Diversion Tunnel in the fall of 2011 and is due for completion in the spring of 2014, whilst the announcement of the proposed Passaic River Flood Tunnel in New Jersey earlier this year has again aroused controversy in the state. This article will look at the former, while the latter will be examined in a follow-up article.

Like many creeks in central Texas, Waller Creek is prone to flash flooding, especially in its lower reaches (below 15th Street) which flow through the eastern edge of downtown Austin into Lady Bird Lake. Waller Creek has experienced several dangerous floods over the last century, including the 1915 floods in which 35 people died, the floods of September 1921 and October 1973, May 1981, December 1991, October 1998, November 2004 and January 2007. On Memorial Day, May 24 1981, 13 people died in flooding that caused $36m in damage. In 2009, a pedestrian died after being pulled into the creek’s overflow.

Since the 1970’s the City of Austin has been considering diverting the creek in order to reduce the risk of flooding downtown, and thus encourage planned development in the former flood-prone areas. In 1999 the City appointed an environmental and engineering consultancy joint venture to provide professional services for the preliminary design, the final design and the management of the proposed Waller Creek Flood Diversion Tunnel Project.

The overall project has a number of interesting features, including a wide range of objectives and an innovative local funding mechanism. 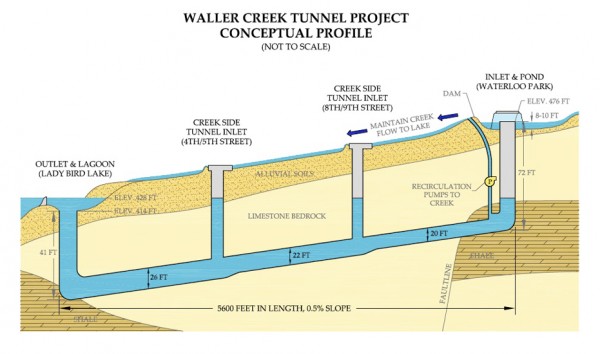 “The Waller Creek Tunnel Project is a long-term investment in Austin’s future and an opportunity to turn a forgotten, flood-prone creek into a vibrant part of downtown,” said Austin City Council Member Sheryl Cole.

A Chain of Parks

The city held a design competition for the future of Waller Creek in 2012; a panel ultimately chose a plan envisioning a “chain of parks” for the area.

The start of the flood mitigation tunnel is in Waterloo Park just east of the State Capitol, formerly a residential area. In the 1970’s the neighbourhood was razed and a park created as part of urban renewal efforts. The park was not developed, as hoped, into Austin’s version of the famed San Antonio River Walk, however, and has largely been neglected.

As part of the flood diversion project, a rainwater retention pond will be constructed in Waterloo Park with an intake structure to the tunnel. The tunnel has two additional storm-water intakes, and its outlet is in Lady Bird Lake in Lady Bird Park, with Palm Park in between also earmarked for upgrading.

The main tunnel will divert up to 85% of the creek’s 100-year floodwater and its intake structure will also remove flood debris and contain a pumping system to recirculate water during dry weather, as well as an aeration chamber. This will ensure that there will water containing adequate levels of dissolved oxygen in the creek year-round, and will also prevent water in the tunnel from becoming stagnant.

The design of the intake structure is reported to be energy efficient, architecturally pleasing, and environmentally thoughtful, incorporating a series of rock structures that allow migration of certain organisms up an “ecological ladder” from the creek through the upstream dam. The same level thought has been given to the design of the outlet structure on Lady Bird Lake. The two structures are being constructed under separate contracts.

The main tunnel is 5,249ft (1,600m) long, and is being excavated from both ends simultaneously to save time and cost. “The tunnel depth varies from 50ft to 70ft (15m to 21m) and the excavation will be at least a single tunnel diameter into solid rock or Austin Limestone,” says Gary Jackson, a project manager at the city’s public works department. “The primary alignment is down the right of way of Sabine Street. We do come adjacent to some buildings but not under any.” In March 2013, Jackson reported that the $146.5 million project was on time and on budget, with construction set to cost $106 million.

Joseph Pantalion, the city’s watershed protection deputy director, states that the tunnel will be able to convey 3.7m gallons (14,000 cubic metres) of floodwater within its 26ft (8m) diameter shaft, protecting about 40 properties and 12 roadways downtown.

The Austin City Council and Travis County Commission created a Tax Increment Financing District (TIF) in 2007, including properties adjacent to Waller Creek between Waterloo Park and Lady Bird Lake, the start and end points of the tunnel. The City of Austin will contribute 100 percent of its property tax revenue in the TIF, and the county will contribute 50 percent of its revenue, towards servicing the debt arising from bonds issued for the tunnel’s construction as well as costs for operation and maintenance during the first 20 years. The TIF will have a duration of 20 years, terminating in 2028, whereafter the City will take over the maintenance of the tunnel at its cost.

In addition, the City also approved a plan to raise the citywide drainage fee, which is paid by all property owners and renters, by 40 cents in 2015.

One of the consultants, Bill Espey, had studied Waller Creek as part of his dissertation (“A Study of Some Effects of Urbanization on Storm Runoff from a Small Watershed”) almost half a century earlier, he is now leading the $144m project.

“A tremendous effort was put into ensuring that this project met the engineering objectives of effective flood control but also remained harmonious with the environmental needs of the creek and surrounding areas,” explains Espey. “We gave great respect to the natural beauty and integrity of the creek.”

Ed Hill is a freelance writer and journalist. He is based in South Africa, but reports on flood disasters in all areas of the world for FloodList.com

Zurich Research: “After a Flood Is Really Just Before the Next Flood”