Weeks of flooding in the state of Amazonas in northern Brazil has affected more than 450,000 people across 52 municipalities, State Civil Defence said.

Rivers have been rising since the start of the year and surpassed alert levels in many areas in early April. Figures from the Geological Survey of Brazil (CPRM) show that levels of the Solimões River (name for the upper stretches of the Amazon River in Brazil) in Manacapuru municipality, the Negro River at Manaus and the Amazon River at Itacoatiara have since exceeded the highest alert level, referred to as Cota de inundação severa (Severe flood level). 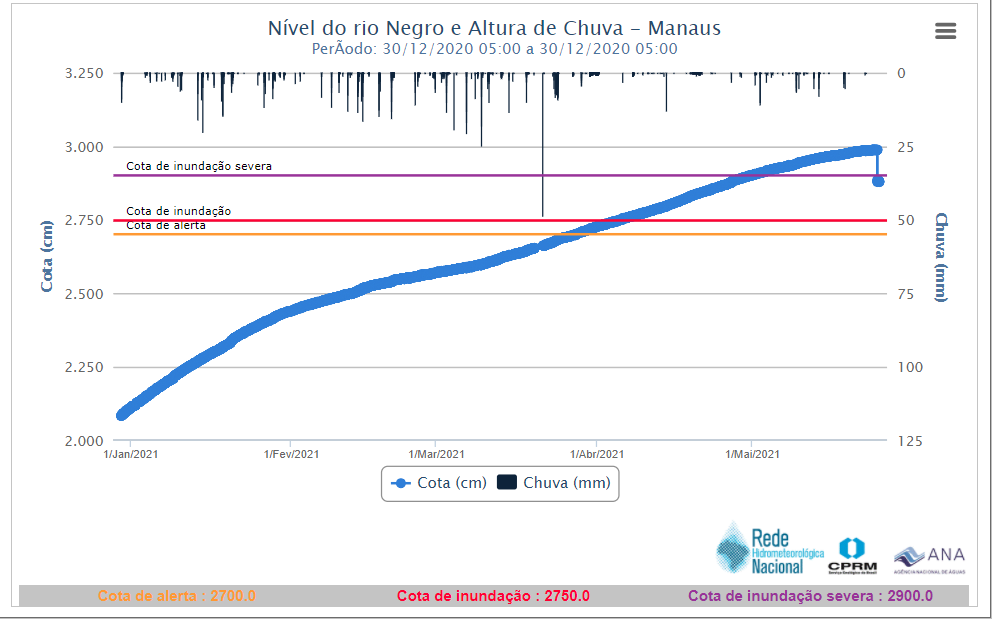 CPRM warned in April that this year’s flood in Manaus is likely to be among the highest in recent years and possibly surpass the highest on record seen in 2012 when the river reached 29.97 metres.

As of 05 May, the Negro River at Manaus stood at 29.19 metres. Civil Defence were monitoring the situation of around 5,000 vulnerable families at several points of the city along the river. Local media reported 5 people were injured on 03 May after floods swept through a camp for refugees from Venezuela. The city of Manaus declared a state of emergency on 06 May 2021. As of 21 May state government 23,960 people have been affected by floods in the capital.

As of 24 May flooding has affected communities across 52 municipalities across Amazonas state, the government said.

To ease the hardship on affected communities, the State Government of Amazonas is carrying out an aid programme under the name Operação Enchente 2021 (Operation Flood 2021), repairing flood damage, shoring up flood defences, distributing food items and offering credit, debt amnesty and the suspension of the water charges.

Over the last few weeks aid has been distributed to communities in several municipalities in the state, including Manaus, Manacapuru and most recently Careiro da Várzea, where the state government said that flooding has now affected 24,087 people and displaced almost 8,000.