Missouri Governor Jay Nixon said yesterday that over 7,000 structures were damaged in the historic floods that hit the St. Louis area in late December 2015.

“The historic flooding that inundated thousands of homes and businesses in the St. Louis region in a few short days left behind destruction that could take months or longer for our communities to fully recover,” Gov. Nixon said.

“We are focused on directing all the available resources – including of the federal government – to ensure Missouri families and businesses recover as quickly as possible.”

The Governor said that, based on geospatial imagery of the inundated areas, an estimated 7,100 structures were impacted in Franklin, Jefferson, St. Charles, and St. Louis counties.

On Saturday, the federal government approved the Governor’s request for a federal emergency declaration, which made federal resources available, specifically the U.S. Army Corps of Engineers and the Environmental Protection Agency, available to speed debris removal and relieve the strain of response and recovery costs in the St. Louis region.

Since then the state has launched its “Operation Recovery” which is facilitating the collection and disposal of both debris left behind by flood water and household debris, including demolition materials, carpeting, furniture and appliances.

The Governor said that estimates suggest flood damage has left behind as much as half a million tons of debris.

Contractors in the debris removal program will begin picking up debris next week in participating communities.  In addition, the Environmental Protection Agency is responsible for picking up hazardous materials beginning at the end of this week.  The Governor said that debris should be placed curbside, without blocking the roadway.  For more information about the debris removal program, visit www.mo.gov/flood-recovery.

The Governor also announced that damage assessments will begin this week for the purposes of seeking a federal disaster declaration for Individual Assistance. 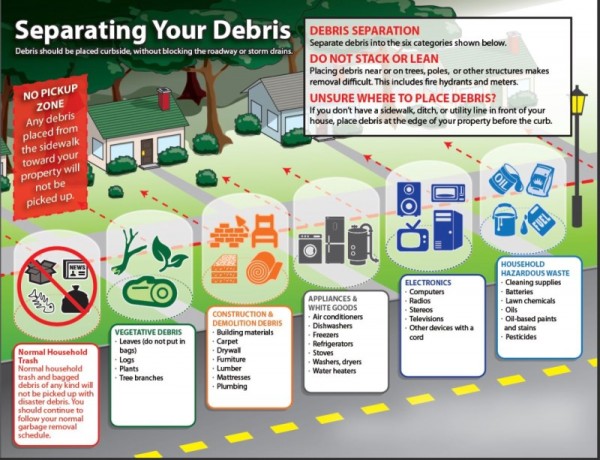