Areas of north Georgia have been inundated with heavy rainfall which resulted in flash floods during much of yesterday. The areas most affected include Gilmer County and Pickens County. In Gilmer County, the emergency manager described the floods in the south east part of the county as “life-threatening”.

An estimated 10 to 15cm or 4 to 6 inches of rain fell in the area during the night and early hours of Thursday morning, 1st August 2013.

There have been no reports of death or injury, although rescue teams in the area have been kept busy rescuing people trapped in cars and stranded in their homes in the north Georgia mountains. Fire fighting crews from the metro Atlanta area were being sent to assist the mountain rescue teams. 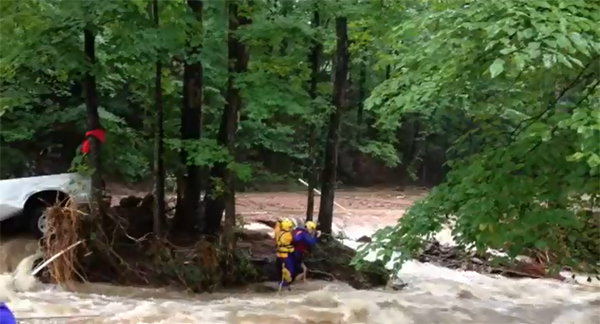 Rescue teams also had to use ropes to rescue two Young Life camp employees who had become stranded in their vehicle after raging flood waters had surrounded them. Video footage of the successful rescue can be seen below: