As another part of our series on historic floods, here we look at the devastating floods that hit central China in 1931, one of which hit the Yangtze River with huge loss of life, and that particular flood is thought to be one of the deadliest floods of modern times.

In 1931 there were a number floods that hit the Republic of China. They were so devastating that they are now considered to be one of the deadliest natural disasters of the twentieth century, excluding famines and pandemics. There were a record number of deaths, which range from an incredible one hundred and forty five thousand to four million people. The areas which were most affected by the natural disaster were the Yangtze River, the Huai River, and the Yellow River. 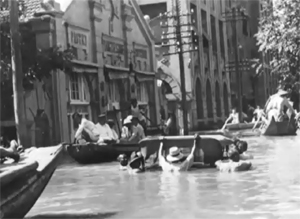 Between July and November in 1931, China experienced some unusual weather patterns. In the years running up to the disaster, China had been suffering from awful drought conditions. But by the winter of 1930, changes began to occur. There was particularly heavy snow fall over parts of the country. As the spring of 1931 arrived and weather started to thaw, China was also bombarded with very heavy rainfall. This sudden and unexpected change meant that the rivers were higher than normal levels. In July, the rainfall grew heavier and heavier, continuing into the August. To make things worse, there were an unusually high number of cyclones during these months, nine in total, when the country usually only recorded having two a year.

The Yangtze River burst its banks, wiping out a lot of the surrounding areas. When the waters receded, the damage was colossal, and estimated to have affected over twenty eight million people. Local sources estimated the number of people killed as one hundred and forty five thousand, but sources form the West tallied a much higher four million. The death toll is still considered to be one of the highest. The flooding of the Yangtze River was at its worst in the July and August of 1931. As the rains hit in July, the area recorded twenty four inches of rainfall from at least four separate weather stations along its banks.

The Yellow River also burst during this time. The Yellow River was, and still is, key to a lot of trade in China, and is one of the most important places for civilisation in the country. Therefore, as the floods hit, China was weakened socially and economically, with huge losses to their farming industries.

The Huai River overflowed, and the waters headed straight for the capital city in China, which at the time was Nanjing. Nanjing was surrounded by water anyway, as it was balanced on an island. However, as the water levels rose, the city suffered colossal damages. It is estimated that millions of people drowned in the flood waters, and those who survived the initial wall of water dies from exposure to diseases such as typhus and cholera. The people in the city became so desperate that they took to cannibalism and infanticide to keep themselves alive. Some families even sold their children and, in some cases, their wives, to stay alive.

The highest levels of water recorded during the floods of 1931 was sixteen metres in Hankou, which was just under two metres higher that the waters of the Shanghai Bund.

One thought on “Central China Floods 1931”