Gundagai is next to the Murrumbidgee River in New South Wales, which flows north westerly for five hundred and fifty nine miles. It is one of the main tributaries of the Murray River, so it is not surprising how frequently and severely Gundagai and the surrounding areas have flooded. 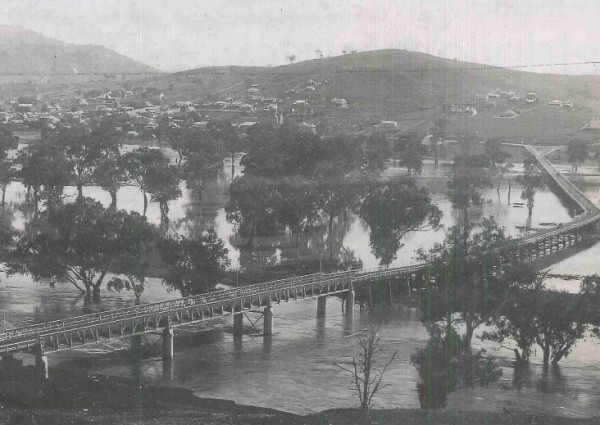 The town of Gundagai is directly on a crossing place of the Murrumbidgee River. There were a number of crossing points, but this was one of the main ones, which eventually turned into the Great South Road. Floods had occurred here before in 1844, but the 1852 flood was larger with a higher death toll. A third of the population of the town of only two hundred and fifty inhabitants were taken in the flood waters.

In 1852 the town was considered to be colonial, but on the 25th June that year, a flash flood hit and the town was swept away. Luckily for the townspeople, Aboriginal men who lived in the area were able to help with rescue operations. Using their canoes made of bark, they floated easily and saved forty people who were stranded in the water. The men received medals for their bravery, as well as payment from all of the inhabitants as a gesture of goodwill, although one of the aborigines died shortly after from being exposed to the conditions. The act of the aborigines was remembered, and represented a resolution of any problems between the locals and the natives.

The Gundagai floods of 1852 were some of the worst to ever hit Australia. The floods resulted in eighty nine deaths, the most Australia has ever seen from flooding.

Only three houses were left standing after the flood waters receded. However, once the clean up was completed, another flood hit in 1853. Gundagai was then rebuilt on higher ground of the surrounding hills of Mount Parnassus and Asbestos Hill to save any similar incidents in future. Even with the relocation, the area still suffered from floods. In 1891, rescue workers and farmers were left stranded in trees because of the rising water. The Murrumbidee River has risen over seven metres on nine separate occasions since 1852, which averages out at once every eleven years.

However, the wetlands in the Gundagai area that was home to a great many types of flora and fauna have now disappeared because of cattle farming in the area and the water being rerouted into pipes under the surface of the earth.

A problem with Australia’s flooding is that despite the rescue efforts and the fact that emergencies are dealt with quickly, companies continue to build properties on low-lying, high-risk land. There is also argument that despite the fact that floods damage land, farming, and transportation links, floods are good for the land and are an important part of natural phases. As waters spread across the land, so do seeds and sediments, and animals are pushed into new areas to flourish.

Gundagai was to suffer further floods throughout the years, the most recent being in 2012, when much of Queensland and parts of New South Wales were badly struck.