Italy has experienced flooding throughout its long history from the Alpine north to its southern tip. In 1963, the Vajont River Dam in a region of Italy just north of Venice overflowed due to a massive landslide toppling into its basin. The flood inundated the valley below and destroying a half-dozen villages. Almost 2500 people died and, in the case of 350 families, every member of a family was killed.

Controversy dogged the construction of this dam whose planning started back in the 1920s. Many engineers warned the government designers about instability of the hills surrounding the proposed dam basin, but the warnings were ignored, as were the continuing occurrence of several smaller landslides in the area over the years.

The construction of Vajont River Dam, one of the tallest dams ever built, was completed in 1959, but the basin was never completely filled. In fact, heavy rains in September 1963 prompted the dam operators to begin a drawdown of the basin, reducing the water level. It is thought that this drawdown coupled with the inherent geological instability of the hills around the basin caused a massive landslide of 260 million cubic metres of dirt, stone and forest to topple into the basin at an estimated speed of 110 KPH (68 MPH).

The landslide occurred late in the evening of October 9th, causing an enormous wave 250 metres (820 feet) tall and containing 50 million cubic metres of water to surge over the top of the dam into the Plave valley below. Ironically, the dam was barely damaged at all, losing only the uppermost metre of masonry.

The wave left an impact crater in the valley floor 80 meters in diameter and 60 metres deep. It totally destroyed the villages of Faè, Longarone, Rivalta, Villanova and Pirago. Other villages further along the valley survived, but with much damage to homes, streets, farms and fields. 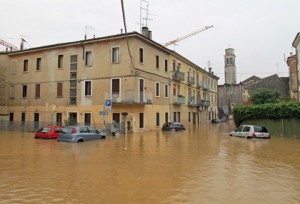 In contrast, the floods that destroyed many art treasures in Florence in November 1966 was a steady rise over several days in the level of the Arno River. The city of Florence had little experience with floods over the years and was not prepared.

The Arno River flows out of the Apennine Mountains in Tuscany in north-central Italy west 240 km (150 miles) to the Ligurian Sea of the Mediterranean. The river is not deep, with less than 10 per cent of its length navigable. Though heavier than usual rains in the Apennines contributed to the flooding, the chief cause was determined to be urban development. When the region had been chiefly agricultural, unpaved land acted as a sponge, soaking up excess water. Pavement exacerbated the water run-off. New roads acted as gathering channels for swift-flowing water and bridges acted as choke-points for the river, causing floodwaters to spread further than normal over the flood plain.

Besides being unprepared for a flood, the city of Florence was essentially closed down in preparation for a national celebration of Armed Forces Day on November 4th, commemorating the Italian victory over Austria in WWI. Businesses were locked up for the holiday and many owners and staff had left town, meaning that, though there was less loss of life than might have been expected, there was also more property damage because no one was around to open buildings and salvage valuable items. One notable exception to that aspect were the city’s jewelers whose night-watchmen contacted the owners as the flood waters began rising into the streets and buildings.

It’s estimated that over half-a-million tons of mud flowed into the city. Over one hundred people died as a result of this flooding from the Arno. The homes of 5000 families were destroyed. 6000 stores went out of business due to damage to either their buildings, their inventory or both. Lost or damaged were between three and four million valuable books and manuscripts and 14,000 works of art.

The archives of the Opera del Duomo, the Gabinetto Vieusseux Library and the National Central Library were all submerged. 40 percent of the official records of the State Archives in Florence were damaged beyond repair, including death, marriage and birth records, property filings, police records and judicial documents. Numerous priceless items were lost from the famed Uffizi Gallery, as well as from private collections, antique dealers, book sellers and the holdings of hospitals, museums, cathedrals and churches.

The 1966 flood of Florence was the worst in the history of the city since 1557. With so much damage to so many prized and priceless pieces of art and literature, restoration became a priority in addition to the humanitarian needs. The Angeli del Fango, or, literally, Angels of the Mud, was a committee founded at the time to restore and conserve as much as possible from the soaked mud-encrusted remnants of Florence’s treasures. Even today, that group continues the work begun decades ago. To prevent any more disastrous floods in Florence, Tuscan regional flood-control projects were begun in the 1980s, building the Bilancino Dam and various spillways on the Sieve tributary of the Arno River.

In 2009, in Sicily, overnight between October 1st and 2nd, intense rainstorms created rivers of mud that swept through the coastal city of Messina on the Ionian Sea. Over 9″ of rain fell in three hours. Buildings, cars and people were swirled away into the sea or engulfed in choking mud. Over thirty people died; the body of one man was discovered afterwards still in his mud-encased car, submerged and suffocated.

Venice
The story of flooding in Venice, Italy is worth a volume in itself. A city built on pilings in a lagoon off the Adriatic Sea, Venice might be called the city that is always flooded. In fact, Venetians six hundred years ago diverted several inland rivers in order to enlarge and deepen the lagoon that separated the city from the mainland, further protecting the city against invading armies.

In the middle of the 20th century, it was discovered that mainland wells that pulled water from the aquifer underneath the region were causing subsidence that was pulling the entire city Venice deeper into the waters of the lagoon. In the 1960s, all such wells were banned. Though subsidence may have eased, Venice still faces the periodic high waters or acqua alta.

Though influenced by the astronomical tides, the acqua alta does not match the schedules of the Adriatic’s ebb and flow. The seasonal wind called the scirocco swirls clockwise around the Adriatic, hitting the opening to Venice’s lagoon from the south. When this scirocco is at its strongest in the spring and in the autumn, water piles up in the lagoon and sea levels rise throughout the city. The bora, another type of wind that is local to the Venetian lagoon, can also add to the flooding effect.

When acqua alta occurs, Venetian buildings whose doors and stairs used to line up perfectly with the gangplanks of docked boats for loading and unloading goods find their formerly-dry front doors under water. A project that began in 2003 and is scheduled to be completed by 2014 is supposed to block some of the rush of water into the lagoon with a vast array of huge floating pontoons; rising underwater gates are yet another massive engineering project to hold back the surging waters.

Flooding in Venice varies from neighborhood to neighborhood, according to the height of sidewalks, the presence of parapets, the local sewer layout, the distance of a neighborhood from a direct channel of the lagoon and the possibility for backup of water within a neighborhood’s water drainage system.

Normally, the acqua alta ranges from 102-140 cm (40-55 inches) above sea level; the highest ever reached was 193 cm (76 inches) in 1966. Anchored planks are deployed as emergency walkways when acqua alta begins. Any acqua alta over 144 cm (57 inches) is enough to flood such tourist attractions as St Marks Square. In the past ten years, there have been a half-dozen instances of these highest-level acqua alta instances. Such levels put more than 60 per cent of the streets and plazas of Venice under water. The highest most-recent instance was 160 cm (63 inches) in December 2008.