The worst years for flooding in this region was the period from 2005 through 2010, exceeding the record floods there in 1970 by almost all measurements. In the fall of 2005, at the same time that Hurricane Katrina was hitting the United States and devastating the city of New Orleans, severe rain caused flooding in Austria, Switzerland, Germany and Romania. 62 people died and thousands of families were evacuated from their homes in all four countries.

The next year, however, was far worse. Extra-heavy snowfall over the winter of 2005/2006 covered the high altitudes of Europe and the spring snowmelt swelled the two major rivers, the Danube and the Elbe, in the spring of 2006. Heavy rain further increased the river levels. Poor river control systems in southeastern Europe contributed to the problem, especially in Bulgaria, Serbia and Romania. The Danube reached an overflow height of 9 metres at Rousse, Bulgaria, the highest since 1970, and reached 9.65 metres at Veliko Gradište, Serbia. In Romania, floodwaters were diverted to farmland to protect cities; by May, over 16,000 people had been evacuated from 150 towns and villages along the length of the Danube.

In the spring of 2006, the Elbe River exceeded 150-year-old records in both Germany and in the Czech Republic. The German town of Hitzacker reported the river reaching 7.63 metres above normal levels. However, previous experience from local flooding in 2002 had prompted both the Czech Republic and the German state of Saxony to build strong levee systems to contain the Danube — neither suffered any flooding emergencies. In Hungary, at Budapest, the Danube reached 8.65 metres above normal height, but the city’s flood control measures contained the flood threat. The protection achieved against flooding did vary from region to region in this part of Europe — old dikes and levees collapsed and new ones held.

The floods in 2010, however, exceeded all those flood events in the previous few years. Though fewer people died in each successive year, the extent of the flooding increased greatly. From May to August, rain continued on and on, swelling rivers already swollen with snowmelt from heavy snows the winter before. In Poland, what would have been normally two month’s worth of rain fell in one twenty-four hour period. Germany, Austria, Hungary, the Czech Republic, Serbia, Slovakia and the Ukraine were all affected. 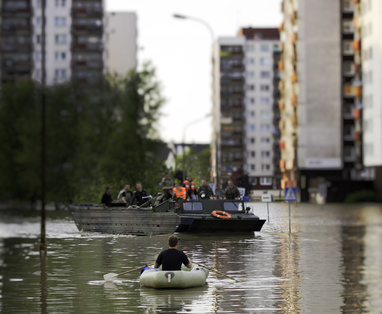 The 2010 flooding in Albania, though, began in January. A natural disaster was declared by the Albanian government on January 5th, long before many other countries downstream from the snow-covered mountains began their own experiences with the floodwaters. Entire towns in Albania were completely cut off; somewhere between 15,000 and 16,000 people had to be evacuated. In Poland, flooding began in mid-May and continued over the entire spring and into the summer. Rivers broke through their banks and flooded towns and villages. In June, twelve rivers in Poland had reached or exceeded their criteria for flood stage. Railroad bridges over some streams were torn apart by the force of the waters. In Hungary, eighteen towns were cut off by floodwaters, roads and reservoirs were declared unstable and armies of workmen had to struggle to reinforce failing levees.

The final cost of these spring floods was estimated at 2.5 billion Euros. Total confirmed fatalities for the 2010 floods over all the central and eastern European countries was 34 dead, with a dozen more missing and fate unknown.

Conclusion
Floods in Europe, though continuous over recorded time, seem to have become much more destructive in recent years, if only because there are that many more people inhabiting the floodplains of the continent. Flood control measures do seem to work, until, of course, floods occur that exceed the ones planned for.