Residents of New York City will remember the chaos caused by Hurricane Sandy in 2012.

One of the most talked about (and costly) issues after the storm was the flooding of the subway tunnels of the transport system. Eight subway tunnels in total were flooded by millions of gallons of water. The South Ferry station in Manhattan for example, was flooded to ceiling height. The flood defence system at the time consisted of the standard flood defences that we all use, sandbags and plywood. 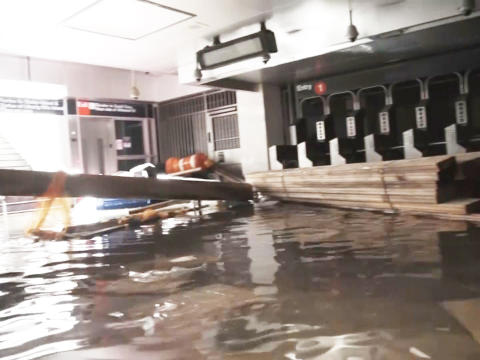 The transport system was crippled by the disaster. Much of the tunnel system was built over 100 years ago, and little or nothing had been built or included to counteract severe flooding. In fact the incoming chairman of the MTA, Tom Prendergast, estimated that there are 540 places in Lower Manhattan alone where water can get into the tunnel system. These include stairways, station entrances and exits and ventilation grates.

Today, the Metropolitan Transportation Authority (MTA) announced a “low-tech” but still radical solution to any possible floods in the future.

The solution basically consists of inserting huge inflatable plugs in the tunnels, hopefully to seal off the whole subway network and keep it water tight. The system was tested at the South Ferry station that had suffered so badly last October. The plugs are thought to be about 30 feet (about 10 metres) long.

“We don’t have to wait for space-age solutions or rocket-science solutions,”

The system will hopefully be ready and fully functioning this year, or at least early in 2014.