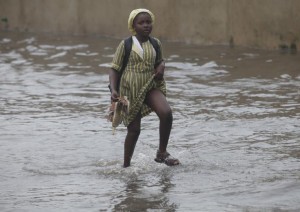 A report came out this week regarding the prospect of flooding in Nigeria. The report is the Annual Flood Outlook for Nigeria. It was written by Nigeria’s Hydrological Services Agency, the Director General of which is John Shamonda.

It gives a list of the 31 states likely to be hit by floods this year. Only a few states seem to escape, including the Federal Capital Territory. The flood warning is based on data and reports made by the Nigerian Meteorological Agency (NIMET). In these reports, NIMET had predicted high rainfalls for 2013. The period of July to September is usually the worst for floods and heavy rainfall in Nigeria, which has suffered terrible floods in the last few years.

Last week Nigeria held a 3 day conference on the threat of flooding in the country. The event was organised by Shamonda’s Agency (Nigeria Hydrological Services Agency or NIHSA). The states likely to be hit by flooding in the near future are:

With flood threats so clearly marked, efforts were being geared towards ensuring that the effect was less felt in these areas. After the flood conference, John Shamonda said:

“Floods and associated hazards may be inevitable, but they can be minimised and turned into an opportunity to transform society into a higher level of sustainability. This requires pro-activeness and a change of paradigm from emergency management to flood risk management in order to avert a disaster,”

However, the flood forecasts might not be the most precise compared to methods of flood forecasting used in other countries. Regarding reliability of the forecasts, John Shamonda said:

“In the absence of a reliable model adapted for flood forecasting for the country, the committee adopted simple empirical techniques of relating flood factors referenced to 2012 data and flood extent in combination with spatial analysis using our own method to assess the flood outlook for 2013 based on NIMET’s 2013 SRP data.

“The analysis of deviation in annual rainfall and length of season, together with 2012 flow discharges observed at selected stations led to the outlook of greater flooding scenario across the country than occurred in 2012. A digital map of the country showing the spatial extent of flooding to be expected in 2013 is a major output of the assessment.”

With 31 of Nigeria’s 36 states one the list of those likely to be hit, Shamonda went on to dicuss those areas at the highest risk:

“The peak floods at the confluence of Rivers Niger and Benue to the Niger Delta are also expected to be as high as the 2012 floods. The worst scenario are expected in Kogi, Edo, Delta and Anambra States, the Coastal Delta States of Bayelsa, Rivers and Delta and some States in the Southwest such as Ondo, Ogun, and Lagos are expected to have coastal flooding.

“Also flash floods are expected in major urban centres of Lagos, Port Harcourt, Kano, Yola, Onitsha, Oshogbo, Ibadan, except where urban drainage facilities may have been cleared of debris and waste dumps.”

So with such devastating flooding predicted, what action will Nigeria take?

A possibility is lowering the storage during May and June in the major reservoirs on the Komadugu, Yobe Basin and the Niger and Benue basins. This should leave plenty of room for the heavy rainfalls of July.

This may well have been said with regard to what happened in 2012 in northern Nigeria, when 2 million people were displaced from their homes after authorities had to open the floodgates of the Challawa and Tiga dams, in Kino State. Torrential rains in September 2012 caused the Eleyele Dam near Ibadan city to burst, killing more than 120 people

On the issue of preparedness, Shamonda said:

“Governments at all levels should create awareness on the need for communities to relocate to safer terrain. The need to develop flood modelling and early warning systems cannot be overemphasized with current trends in climate and weather change.

“There is also need to carry out a comprehensive flood hazard map for all areas considered at risk of flooding in the country”.

Even if the flood predictions turn out to be false, at least the report has raised awareness of flooding across Nigeria and in particular in givernment. Hopefully this will lead to concerted efforts and attention when it comes to preparing and dealing with flooding. When commenting on the report, Minister of Water Resources, Mrs. Sarah Ochkepe, said:

“The 2013 Flood Outlook is a flood risk management element which entails multidisciplinary contributions to improve information that will promote preventive and responsive strategies in mitigating the impacts of floods through informed decisions by relevant authorities and agencies.”

Europe Must Adapt to Floods

One thought on “Nigeria Expects Devastating Floods in 2013”